Now Rakhi Sawant has shared a post on her social media account and in that post, she has shown a screenshot tweeted by her husband. In this tweet, Ritesh tagged Aam Aadmi Party leader Raghav Chadha, Punjab Police, BJP, and Aam Aadmi Party and tried to convince Delhi Chief Minister and Aam Aadmi Party leader Arvind Kejriwal by tagging him in his Twitter post. In this post, Ritesh tagged Delhi Chief Minister Arvind Kejriwal and wrote, ‘Don’t spoil anyone’s personal life for your political gains. Arvind Kejriwal please educate your MLA because if I am educated then you will not be seen anywhere. This post of her husband Ritesh has been shared by Rakhi Sawant on her social media account. haring this post on her social media account, Rakhi Sawant wrote in the caption, ‘My husband has replied to Raghav Chaddha. People used to harass me knowing me alone till now. Today I have tears in my eyes saying that today I also have someone who is standing to protect my honor and honor. Thank you, my dear husband. 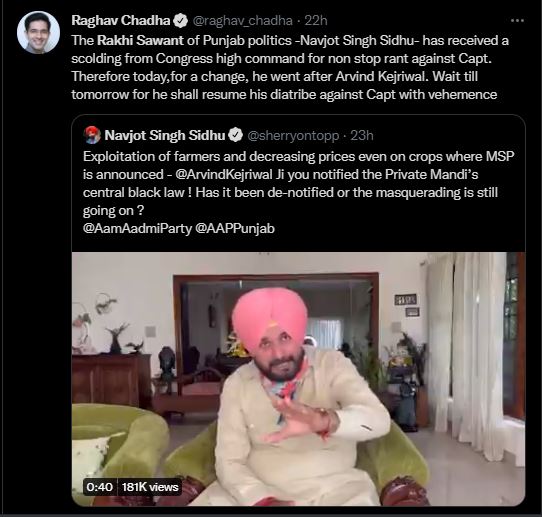 In which she is seen warning Raghav Chaddha, saying that Raghav Chaddha should stay away from me and my name. If you know my name, I will correct your chaddha. Mr. Chaddha you see yourself you need my name to be trending. Rakhi Sawant had secretly married Ritesh in a hotel in Mumbai in the year 2019. However, Riteish has not yet appeared in front of the media. When Rakhi went to Bigg Boss 14, it was said many times that her husband would be seen in the show but it was not seen.