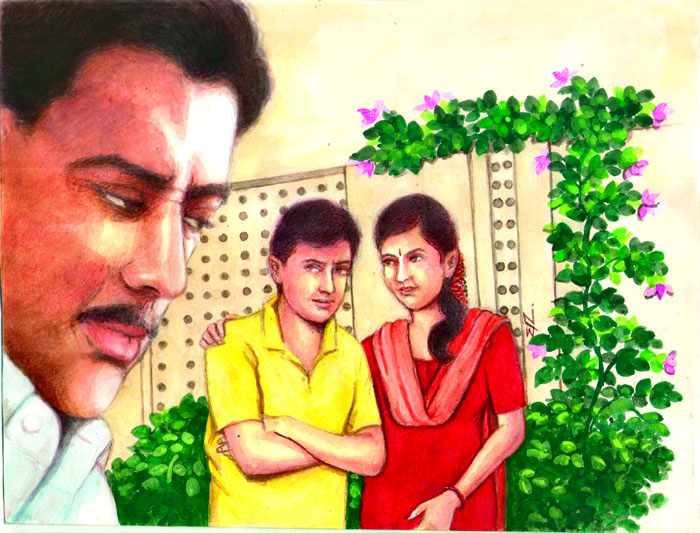 For Pravin, this summer vacation away from Mumbai was eventful. For the first time he visited his father’s Thravaadu home alone. He had earlier visited the place along with his parents and sister. His cousins in the village also had their vacations then. They too came to enjoy the vacation in the old house where his grandma and other families lived.

Each day, he had a new experience. He ate the mango without a knife for the first time in his life…..! Played a game with five small stones. The game of ball made of coconut leaves was very interesting. The evenings were spent with activities in connection with the 10-day festival in a temple nearby. He watched with awe the elephants eating the coconut leaves and taking long hours in the river for the ritualistic bath.

Likewise, he too was very much wanted by all his cousins. They liked to listen to him talking about AmitabhBachchan, Tendulkar, Ganapthi festival etc. His narration about Mumbai’s local trains, high-rise buildings etc kindled a lot of interest among his cousins who have never gone beyond Palakkad. The trip to the temple to see the fireworks late in the night and the return through the harvested rice fields holding the “torch” made of dried coconut leaves did leave a sense of adventure in his mind. Next day he went for lunch in the house of Maya, his paternal cousin. After lunch, they talked a lot about their activities in the schools, movies they saw etc etc for a long time.

A few minutes before Pravin started his return journey, Maya came to meet him. She told him something which put off Pravin very badly. However, he politely bid farewell and started in his uncle’s car to the airport. He could not talk much to his uncle and cousins sitting in the car as he was engrossed in thoughts which got triggered by what Maya told him.

His father Hari had come to the airport much ahead of the arrival time. He was received with a warm hug which was not reciprocated well. Hari could make out that he was not in Pravin. He kept on asking him probing questions while driving the car. As the car gathered speed over the Bandra- Worli sea link, Pravin turned his eyes towards the blue sea as if looking for answers to his questions which agitated him for the past few hours…! As they took a turn to Worli sea face, he requested Hari to stop the car for a while to go to the beach side. He wanted to talk something very important to Hari. As they sat near the R K Laxman’s common man statue, Pravin started narrating what Maya told him just before he started for the airport. After seeing Maya and Pravin together for a long time, one of the aunts appears to have reprimanded her for moving closely with him and also revealed that he was not born in the family…! This was haunting Pravin throughout the flight and thereafter. “Am I not your son? Is Priya not my real sister…?” he cried…..Hari took a deep breath and told Pravin all the facts.

“Priya was about two years old when your mother was diagnosed with a major health problem which the doctor described as a very rare ailment. The doctors also ruled out the possibility of a second child for us. That was the time when we started visiting Divine Home in Bandra Hills. Don’t you remember, we used go there to feed the inmates on your birthdays? We went there on the second birthday of Priya .

She started fondling a cute baby there. As we were preparing to return she started crying and insisted that she should take the baby home. She was so adament that I started scolding her. And she started crying which invited the attention of the authorities of the home. They told us that the little baby was left at the gate by someone at the dead of the night. He has been crying since then. “Only after seeing your daughter and wife was he quiet. You can take him home if you wish to adopt him.” “Then your mother too joined the fray. When I looked at the child, I felt as if there came a smile at the corner of his lips and I got attracted towards him by looking at his big glowing eyes. We gave a positive reply to the authorities and completed the formalities within a week. That child is you…! That is how we celebrate the birthdays of both your brother and sister together.” Pravin listened to Hari with entranced attention. He always used to love going to the Divine Home and meet the inmates there. He felt as if his love towards his parents and sister increased multifold after knowing the facts. There was an anxious call from home regarding arrival of the flight. Hari told them that there was a traffic congestion on the way. As the father and son looked at each other with a renewed sense of oneness, a tall wave from the sea came onto them wetting their legs up to the knees. Pravin threw himself onto Hari and started sobbing loudly… “I love you….I love you….” A few drops of tears rolled down from Hari’s eyes and fell on Pravin’s head too. After reaching home the hugs Pravin gave his sister and mother were much warmer and stronger than ever.

Making Sense Of Adolescents, Decoding Our Teenage Daughters
Batla House Trailer Released: John in an intense cop look.
7 Worst Things About Dating These Days
Answer These 15 Questions And Know If You And Your Partner Are Compatible Or Not