Last month, actress Ananya Panday was summoned three times by the narcotics control bureau (NCB) for asking questions in connection with the Mumbai Drug-on Cruise case. Since then, she has refrained from social media. On Tuesday, she shared her first post since the controversy.

In a video shared with fans and Instagram followers, Ananya was seen sitting in a car catching a rainbow. She captioned the video, “you can’t have a rainbow without a little rain.” 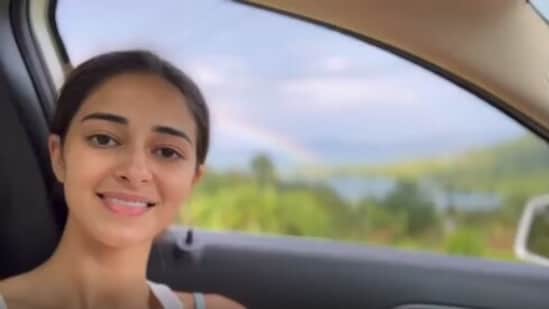 Ananya’s mom, Bhavana Panday, threw a heart emoji in the comments section. Film producer Guneet Monga and Helena Alesi, a friend of Ananya, also commented with a heart emoji. One fan wrote: “The good and the bad things are part of life. Accept it. The bad is a learning process, you will surpass it. If you do you will be happy and it will be a good thing.”

Last month, Ananya was cross-examined by the NCB for hours in the Drug cruise case after her name appeared on WhatsApp chat during an authorities’ investigation into the arrest of Shah Rukh Khan’s son Aryan Khan and others. Officials who spoke on condition of her anonymity told that Ananya claimed she had never used drugs and that her conversation with a light vein.

Ananya’s house in Bandra was raided by the NCB. During the raid, officials confiscated her laptop and cell phone. The actor then arrived at the NCB’s office with the actor’s father, Chunky Panday.

Ananya is childhood friends with Aryan and his younger sister, Suhana Khan. The three were often seen together at parties and other events. Aryans were released from Arthur Road Prison in Mumbai on October 30, two days after the Bombay High Court granted him bail. He spent 22 days behind the bar.