Anil Kapoor Shares His Diet Secrets To Stay Fit Even At 65!

Anil Kapoor, a Bollywood actor, revealed his fitness routine in a new video, which includes good sleep and a balanced diet.

Anil Kapoor, 65, is a Bollywood actor who is at the top of his profession and performing a lot of work at an age when most of his colleagues have mostly moved away from arc lights. His rigorous physical regimen motivates and encourages the next generation of performers. Varun Dhawan, his JugJugg Jeeyo co-star, recently referred to him as an “alien” after he performed some challenging yoga asanas. So, what is the key to Kapoor’s tight and toned figure at the age of 65? In his most recent Instagram post, the actor disclosed the truth.

In a recent Instagram post, Kapoor discussed his exercise regimen with his fans and stated that he gets a full seven hours of sleep every night. He mentioned that he plays darts to keep his concentration and focus in check at the start of the day. His day begins with a “competitive” start thanks to the sport. “Of course, Anil always wins this,” one of his buddies says.

Anil Kapoor also defined fitness for himself. “Fitness for me is feeling good about myself,” he explained. I try to keep it in balance with my workouts. I must be physically healthy enough to face the camera. My trainer, Mark, devises a strategy for me, and I follow it perfectly. 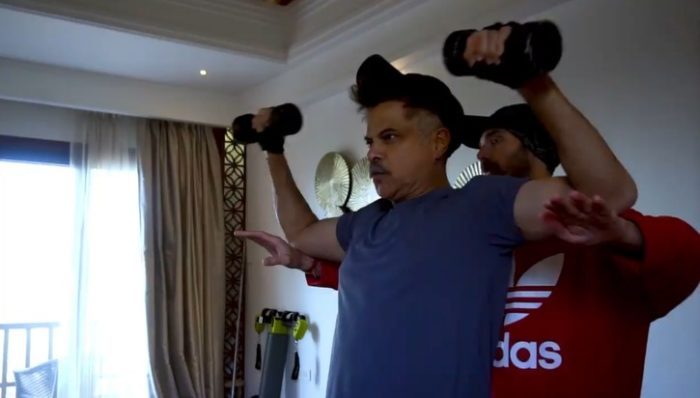 He was most recently seen in Varun Dhawan and Kiara Advani’s JugJugg Jeeyo, which also starred Neetu Kapoor. Despite varied reviews, the picture has managed to impress audiences and has performed well at the box office.