Be Your Own Happiness So introspect. 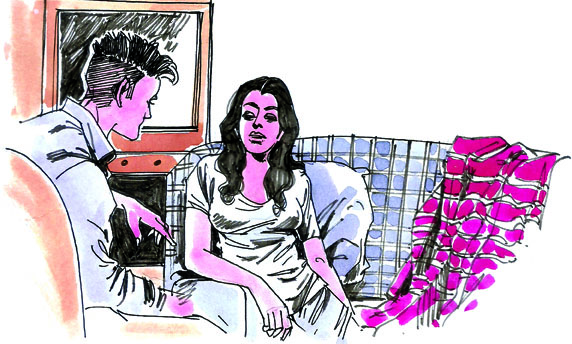 “My mum is coming to live with us for the very first time. I don’t want her to be all alone while we work. Somebody needs to be home.” “Why don’t you stay, Viyan?” “You know its impossible for me to take days off.”

Evening traffic had become her norm. Honking through, breaking signals and escaping speeding tickets with lame excuses Era made it home from work. It was 6 pm. She opened the door to her empty house.

Every evening she wondered why she got impatient on her way back to her house. There was no one waiting back home, her maid took care of her house chores and cooking, her family lived all together in another city, her husband worked in an MNC so he barely made it at dinner time. Her social life in this new city was miserable and her hobbies didn’t really surpass the stage of being written on a CV. She had nothing to look forward to, neither had she anything to be engaged with.

Like every other evening she sat with her strong coffee cup on the front porch staring at the chirping birds, scrolling through her every social media account and waiting for her husband to pull up in the garage.

That evening her husband walked into the kitchen with a crackling voice and big smile.

“Mum is coming to stay with us for a month. Finally I will be able to eat some homecooked food. Are you excited? You will also be able to spend some time with her,” her husband said and walked straight to the living room.

Era rolled her eyes, scooped a big scoop of ice-cream and straightaway took a big bite. She wasn’t upset but just didn’t know how to respond. Era had completed three marriage years and still had never lived with her in-laws for more than two days. Not because they were at odds, it was because her husband Viyan never got any time off. One annual visit for Diwali was all he could afford. On the other hand her mom-in-law was busy baby sitting her daughter and elder son’s toddlers, her father-in-law was busy running his coaching institution.

Era hand had a love marriage. Hers was a typical cheesy college romance. She was the studious kind and he an average guy and they both had not so magically worked it out. There was no drama involved as both the families were very open minded and welcoming of the other. But Era had to step back so that Viyan could take the high-paying job and move with him to Mumbai.

‘So you will manage with your work leave thing – right? Viyan returned to the kitchen once his excitement had settled down and asked, as he helped himself with the ice-cream.

“Leave for what?” Era queried.

“My mum is coming to live with us for the very first time. I don’t want her to be all alone while we work. Somebody needs to be home.”

“You know its impossible for me to take days off.” Anyway, I am due for promotion so I cannot afford to stay back. You can manage Era. Just make an excuse. Say that you are sick….Make up anything.”

“Why don’t you make such an excuse? Anyway what am I going to do with her all day long? The two of us have barely ever spoken with each other.”

‘Do the women thing. Come on, don’t be a spoil sport. I am sure you will have a good time with her. The two of you will be fine.’

‘But, Viyan, I….’ Before Era could complete Viyan left and sat with his headphones on to watch his favourite web series.

That night, Era tossed on all sides on her bed. She didn’t hate her mom-in-law but was genuinely clueless of what she could possibly do with a seventy-year-old woman for a month. She couldn’t just chill out with her the way she did with her friends. Her racing thoughts were hampered by the shrieking alarm clock. It was already seven the next morning. She pushed the comforter to get out of her bed. Mom-in-law’s arrival still occupied her mind.

“Viyan, are you sure you don’t want to take few days off while mum is here with us?” Era asked apprehensively.

“No, Era, I just cannot afford to. Anyway, I have weekends to spend time with her.”

“What do you mean? We live together and she is here only for one month, then we will have all the time in the world for ourselves’.”

Era’s life continued as per the set routine until a week later when her mom-in-law finally arrived. She didn’t take too long to settle in and, to Era’s surprise, she was pretty chilled out and fun to be with. She actually went for hour-long brisk walks every morning, listened to English songs, could drive effortlessly, loved to visit the gaming section of the mall and occasionally even sipped wine! She hadn’t expected her mom-in-law to be this cool!

Two weeks had passed since Viyan’s mom had arrived. Although Era had taken a month off to keep company with her mom-in-law, Viyan hadn’t spent even a day with her. He would often make an excuse to meet his work colleagues or some unknown friend and leave the two ladies to entertain themselves. Era did care for her mom-in-law and she was equally cared for in return. The two of them had bonded very quickly and would often spend time shopping, cooking or doing touristy things.

Despite the fact that the two enjoyed each other’s company mom-in-law dearest was a little concerned. She had observed Era for two weeks and felt some hidden sadness in her eyes. One evening as Era watered the plants, she took the opportunity to confront her.

“What? I didn’t get you,” she answered but also got a little alert. “Are you happy with Viyan?” she repeated her question.

“And you are saying this because I am his mother?”

“Then why are you lying?”

“I am not,” Era defended herself.

“Era, answer honestly. Forget that you are talking with your mom-in-law.”

“Then am I the reason for your sadness?”

“No. In fact I like having you around. These two weeks were the nicest days I have ever spent in this house. Otherwise, I feel so lonely here. Viyan is always busy during the weekdays and I have nothing better to do once I return from work.”

“Is that the problem?” she asked politely.

“No, I am not complaining and I also love having you around. For the first time I cooked in the kitchen, took care of my house, explored the city like never before, ate some street food for the first time after my wedding….”

“Era, that is not the answer to my question. All I wanted to know was, if you were happy with Viyan.”

“Era, love initiates a relation but happiness sustains it. I feel sad to say this but, as bitter as this truth sounds it is true. The rate at which the two of you are going, I am afraid about the future. I really don’t see you two, together. 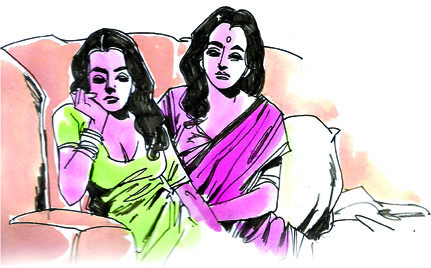 You know why? because you depend on Viyan for your happiness, to cheer you up, to do something exciting. You have forgotten to live for yourself. You have lost your zest which brought you closer to Viyan. The day it dies completely, so will this relationship.

It’s okay to go out all by yourself, take a walk, eat that ice-cream, dance to a song, go for a dinner. It’s not as awkward as it seems to be, it will just cheer you up.

The day you start loving yourself unconditionally you will realise the power it holds and the power you would want to live with.”