You read it right – a blue flower that indeed looks like the vulva of female genitalia. Aptly named Clitoria Ternatea, this stunningly beautiful blue flower (found in blue, lilac, and white too) is found wildly across South Asia and Southeast Asia. In India, it is extensively used in Ayurvedic remedies.

Controversies arose among botanists in the past on the naming of this genus ‘Clitoria’ as they found it too explicit. They tried to rename the plant, but its uncanny resemblance to the female genitalia made it obvious to the rest of them, so the changes never stuck! 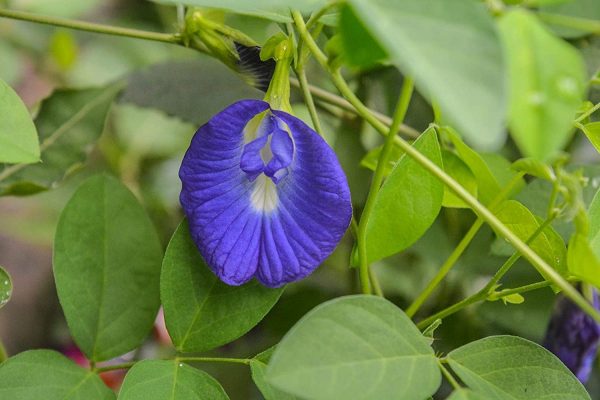 Around the globe, this plant’s benefits have been documented – for instance, In ancient Thai medicine, it has been used to treat premature graying and male pattern baldness. It is also used in traditional Chinese medicine.

In India, it is known as Shanka Pushpi, Aparajitha, Koyala, etc. In traditional Ayurvedic medicine, it is used as a memory enhancer, brain booster, anti-inflammatory, indigestion, neurological stress reliever, and more. Isn’t that quite a punch?

Striking blue tea made from the flower

Speaking of punches, tea made from the blue pea flower (another name) is a staple brew in many countries including Vietnam and Thailand much like chamomile tea in European countries. It is said to induce calm and help sleep better. It also changes color to deeper purple when lemon is added and pink when hibiscus is added. Crazy!

It is also used in Burmese, Thai, and Malaysian cuisine. Look at this!

That is nasi kerabu, a Malaysian dish, where the butterfly pea (yet another name) is used as natural food coloring to make the rice blue, to be eaten with dried fish, crackers, or fried chicken. Looks scrumptious, doesn’t it?

What science has to say

Science is catching up, with studies confirming various health benefits. In animal studies, it expressed memory-enhancing properties, response to a wide spectrum of neurological issues (anti-depression, anxiolytic, antipyretic) in low potency. Recent Chinese research suggests that the Clitoria Ternatea might work against specific lung cancer cells. More studies are needed to confirm the data are underway.

A plant for yourself

The best part is this plant is very easy to grow

Transplant a sapling or put a few seeds in the ground, and you would have your very own supply of this blue goodness; they grow very fast.

So what are you waiting for? Grab yourself some Clitoria Tenatea!