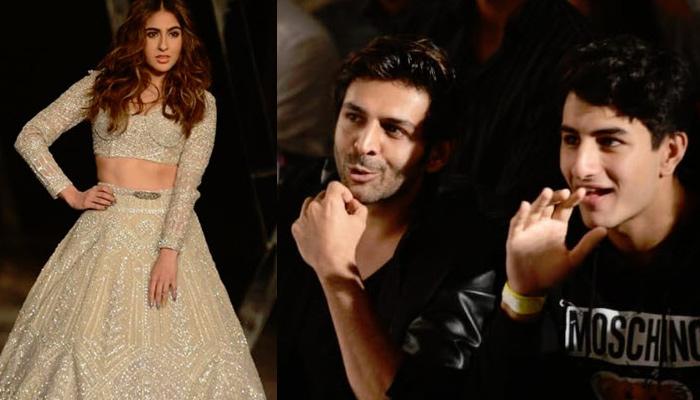 Sara Ali Khan debuted on Koffee With Karan 6 accompanied by papa Saif Ali Khan. The bubbly, confident, pretty girl swayed our hearts away. It was the same show where she openly confessed her will to date Kartik Aaryan. Eventually her fan-club expanded and all went ‘aww’ seeing Sara crushing on Kartik. With two consecutive hits she has made a space for herself in Bollywood .

The actress is so down to earth and the factor counted to a huge number of followers. When she talks, she can relate with the audience’s life. Thus, what we see is her pure heart. Even Kartik expressed his will to date the newcomer. The dating rumours are making rounds and paparazzi has got no chill. Director Imtiaz Ali tied the two actors for his upcoming Love Aajkal 2. The two will be seen romancing on screen.

At India Couture Week(ICW) 2019, we saw the rumoured  boyfriend with Sara’s brother Ibrahim. The two sat beside each other, busy in their own talks.  As they see Sara walk down the ramp for Falguni and Shane Peacock, their expressions made the bro code evident. The actress looked stunning in her blingy lehenga-choli, whereas Kartik and Ibrahim were left stunned and cheered for their girl. SEE for yourself:

It is not for the first time that her beau tried to bond with her family. When Sara returned to Mumbai after vacaying in London with mommy Amrita and brother Ibrahim, Kartik was there at the airport to pick up the family. We all have waited for Kartik and Sara to pair up. Imtiaz Ali made the job easy. Their film will release this December.