‘Daughter Of Ganga’ Found In Wooden Box Floating In River, UP Government To Take Care

After a newborn girl rescued a boatman in the Ganga in Ghazipur, Uttar Pradesh chief minister Yogi Adityanath has announced that the state government will take care of the girl and the boatman will be rewarded for this noble act.

CM, while sharing a news clipping on his official Twitter handle wrote in Hindi and roughly translated, “The boatman who saved the life of newborn girl “Ganga” found in a box floating on the waves of mother Ganga has presented a unique example of humanity. As a token of gratitude, batman will be honored with all eligible government schemes. @UPGovt will make all necessary arrangements for the upbringing of the newborn girl, ” he said.

According to the information, the newborn girl found inside a wooden box floating in the Ganga in Ghazipur, and the box contained a picture of goddess Durga, a horoscope, and incense sticks. This box was found by a local boatman, Gullu Chaudhary, who carried the girl home. He wants to raise the child, officials said.

Following the matter came to the notice of authorities, the child was admitted to the district hospital. She is stated to be stable. Police said heard voices of a weeping child in the river and he found her alive in the box floating. The girl was wrapped in a piece of cloth along with a note declaring her as the ‘Daughter of Ganga “. 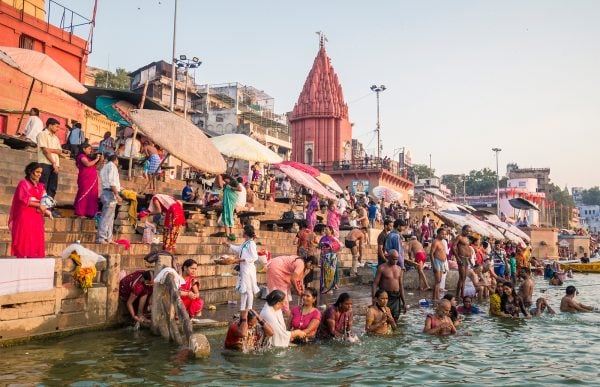 “District Magistrate Mangala Prasad Singh and other officials visited the hospital to enquire about the health of the infant. Thanking Chaudhary for saving the life of the girl, the DM directed officials to provide a new boat to him, reported PTI adding that Chaudhary has expressed his desire to raise the child.

Meanwhile, people have lashed out at the parents of newborns for abandoning their child but also showed praise for boatman as well for the UP government for their efforts.