Veteran actor Dilip Kumar died at a Mumbai hospital on Wednesday at the age of 98, after a prolonged illness. He was known to generations of film-goers as ‘tragedy king’ for his portrayal of the brooding, intense romantic in classics such as Mughal-e-Azam and Devdas. 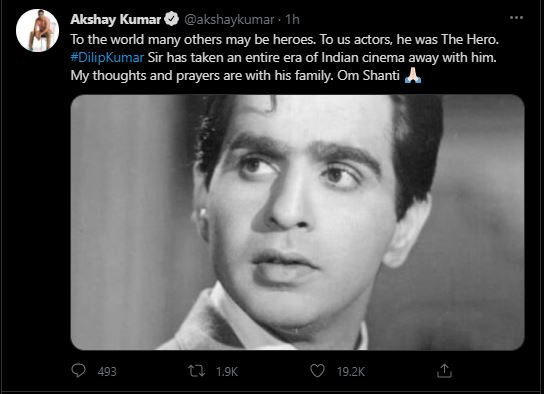 Many film personalities have extended their condolences, taking to social media platforms. Actor Amitabh Bachchan tweeted, “T 3958 – An institution has gone .. whenever the history of Indian Cinema will be written , it shall always be ‘before Dilip Kumar, and after Dilip Kumar’ .. My duas for peace of his soul and the strength to the family to bear this loss .. Deeply saddened …” Actor Akshay Kumar shared a picture of Dilip Kumar and tweeted, “To the world many others may be heroes. To us actors, he was The Hero. #DilipKumar Sir has taken an entire era of Indian cinema away with him. My thoughts and prayers are with his family. Om Shanti” 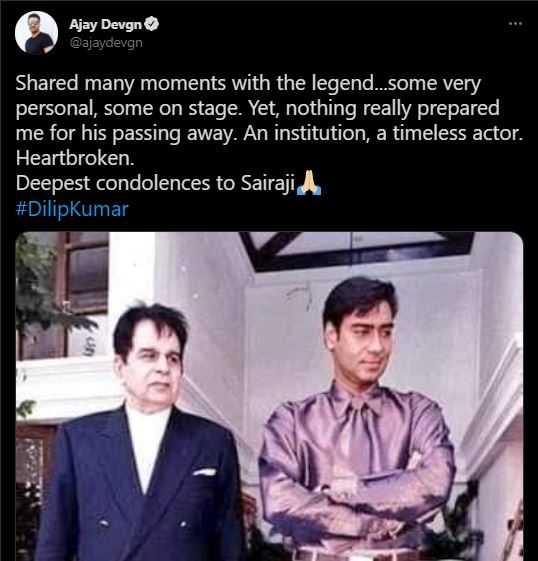 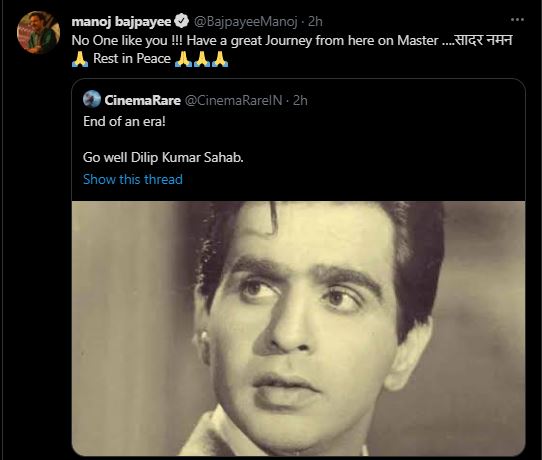 Actor Ajay Devgn also tweeted sharing an old picture with Dilip Kumar, “Shared many moments with the legend…some very personal, some on stage. Yet, nothing really prepared me for his passing away. An institution, a timeless actor. Heartbroken. Deepest condolences to Sairaji #DilipKumar.” Actor Manoj Bajpayee wrote on Twitter, “No One like you !!! Have a great Journey from here on Master नमन Rest in Peace.” 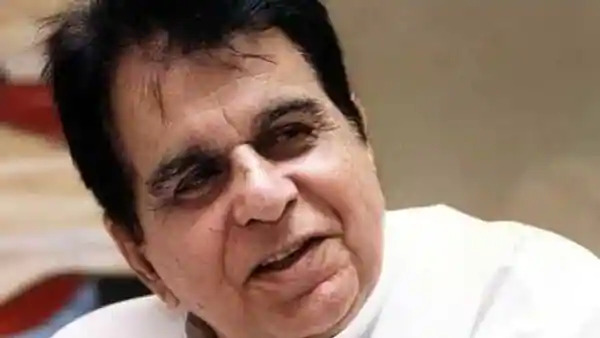 The actor was admitted to the Hinduja Hospital, a non-COVID-19 facility in Khar, last Tuesday. “He passed away due to prolonged illness at 7.30 am,” Dr Jalil Parkar, who had been treating Kumar, told PTI. “With a heavy heart and profound grief, I announce the passing away of our beloved Dilip Saab, few minutes ago. We are from God and to Him we return,” family friend Faisal Farooqui posted from Dilip Kumar’s Twitter handle at 8.01 am. Dilip, who was married to actor Saira Banu, had been in and out of the hospital the last one month and his family had hoped that he would get better. 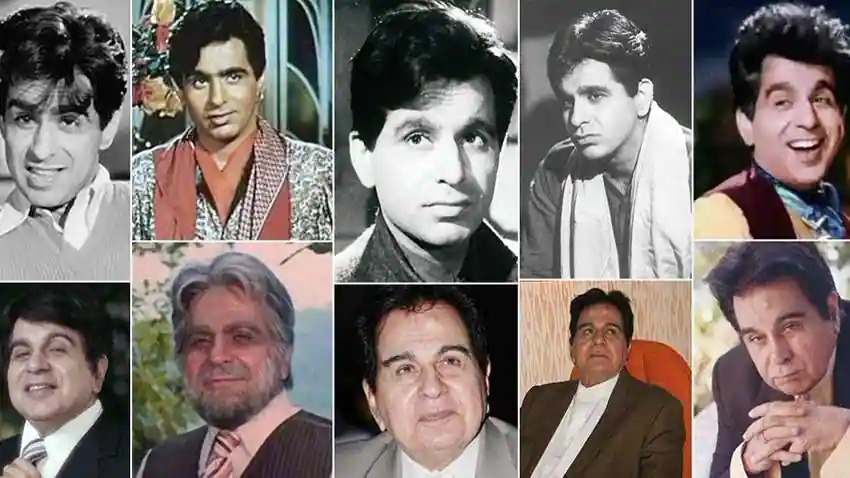 The Hindi cinema veteran, the last of the golden troika with Raj Kapoor and Dev Anand, was admitted to hospital in June following episodes of breathlessness. He was then diagnosed with bilateral pleural effusion, a build-up of excess fluid between the layers of the pleura outside the lungs, and underwent a successful pleural aspiration procedure. He was discharged after five days only to be admitted to the hospital again. Dilip, born Yousuf Khan and often known as the Nehruvian hero, did his first film Jwar Bhata in 1944 and his last Qila in 1998, 54 years later. The five-decade career included Mughal-e-Azam, Devdas, Naya Daur and Ram Aur Shyam and later, as he graduated to character roles, Shakti and Karma.