First-time Fathers of Bollywood – Virat Kohli, Aftab Shivdasani, Hardik Pandya all set for Father’s day celebration tomorrow. In the past year, we have seen several Bollywood celebrities turn parents. From fighting pandemics to battling stress, they have managed to welcome the new bundle of joy into their lives. Ahead of Fathers Day, here let’s take a look at celebrity fathers who will be ringing their First celebration tomorrow.

Virat Kohli and Anoushka Sharma became proud parents of Vamika on 11 January 2021. This lucky father is now often accompanied by a mother-daughter duo on cricket tours. A picture of Virat posing with his team member, with Vamiks’s burp cloth on his shoulder, had gone viral on the internet with fans showering the doting dad with love. They refrain from sharing pictures of Vamika on social media. Explaining the reason for it, Virat shared-

“We have decided as a couple to not expose our child to social media before she has an understanding of what social media is and can make her own choice”.

On Nov1, 2020, RJ Anmol and Amrita Rao welcomed a baby boy whom they named ‘Veer’.Sharing a glimpse of Anmol doing Daddy Duties diligently, Amrita had posted a video where he was seen giving massage to their son followed by bath and then putting him to sleep too. Introducing their son to fans, Anmol had shared-

“Hello, World… Meet Our Son #Veer He is looking at his 1st BroFist. Seek Your Blessings.”

Hardik Pandya is an adorable father and his bond with his son Agastya is perfectly snapped by Bollywood actress Natasa Stankovic. From feeding the toddler to enjoying out with the champ, he has set some high parental goals. They welcomed their son Agastya on July 30, 2020. 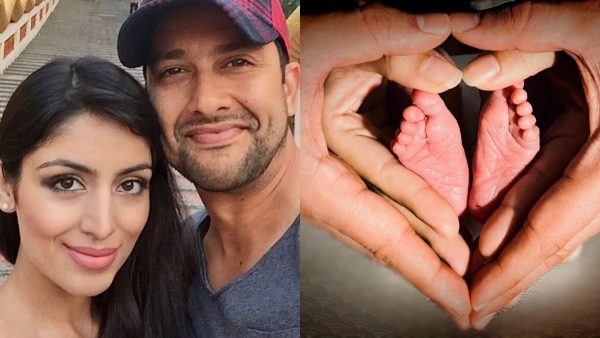 The actor and his wife Nin Dusanj welcomed a baby girl on 28 July in London. The couple has named their daughter Nevaeh Kaur Shivdasani and has refrained from sharing any of her pictures. Attending daddy duties he was once captured and framed while taking his daughter out in a pram while strolling in a park.