The toned figure was showcased by Grace Jones in a sexy bodysuit while she was on stage at the Icon Ball during London Fashion Week.

Grace Jones, 73 seemed to be stealing the show in a bodysuit, which had been magnificently done by her before while being on stage at the Icon Ball of the London Fashion Week. The black sequin ensemble by the hitmaker was considered to be a rare and marvelous kind and the audience appearing at the Landmark Hotel appeared for loving it.

The entire attire comprised of a tight black corset paired with a sequined long black coat, as well as a feathered toque. Grace Jones seemed to be making sure that she was the center of attraction during the time she was on stage and the outfit seemed to be helping her and her attire entirely helped in accomplishing it.

The sexy performance just came after Grace Jones was stepping away from her role in the new film of     James Bond, No Time To Die. In the year 2019, there were rumors that the beauty would be making a cameo in the movie, almost 35 years after she appeared in A View To A Kill beside Roger Moore. 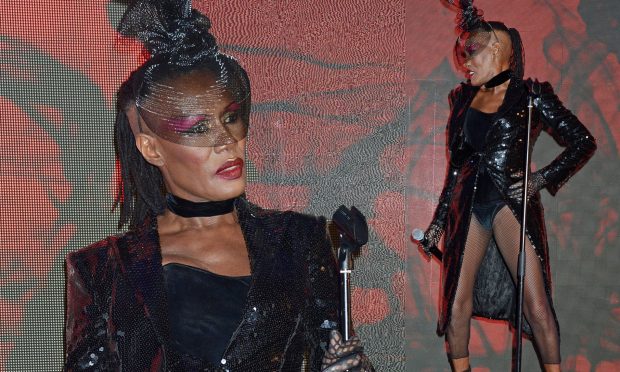 Grace Jones in her Sexy Attire

However, there were no answers as to why she rejected the role and the chance of returning to the longstanding franchise; but per the news, the script didn’t seem to make Grace happy. According to a source, “Bosses were excited about landing her. Of course, she comes with a reputation, so they organized premium accommodation and rolled out the red carpet on set to make her feel welcome, But it turns out Grace was expecting to play a bigger role in the movie and took her brief cameo as a slight”.

It is just a pity that we will not be seeing Grace Jones in the new movie of James Bond; however, she seems to be still performing and her precious fans will get to enjoy her marvelous talents over the stage!