‘I wanted my daughters Janhvi, Khushi to marry and settle down’ – Sridevi.

Shree Amma Yanger Ayyapan; 13 August 1963, she is an Indian actress and film producer. The late actress debut as a child artist in the Tamil film Kandhan Karunai in 1967 at the age of 4, going on to star in several Tamil, Telugu, Malayalam and Kannada films back then… The Tamil film industry was not aware that they choose a legendary actress who will become the first female superstar of the male dominating industry. Yes! We are talking about the very versatile, talented, and most beautiful “Nagin” of Indian Cinema “Sridevi”. 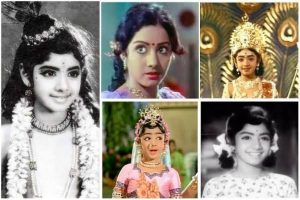 Sridevi is not only a name but an actress who entertain the audience for many decades with her unbelievable chromic timing, style, beauty and acting. She has been feted in many ways during her long and storied career and after her untimely demise in 2018. Often the superlatives are misleading. In Sridevi’s case, each word is justified. Her journey from Charlie Chaplin impression to Nagina, the over-the-top family dramas of the 80s to the studied subtlety of English Vinglish. She was married to producer Bonny Kapoor in 1996 and developed a gap from Indian cinema for more than decades. 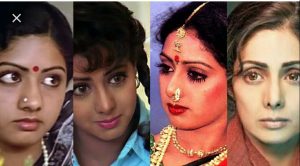 On her 58th birthday anniversary, we have some views of her husband, daughters and about her comeback after 15 years. In an old interview, she talked about her comeback, “This is because of my children and my husband. They encouraged me to come back and do some films and whatever else I’m doing. Otherwise, I was happy just taking care of my children. So that’s it, I’m here.” felt like a newcomer. Talking about the ‘new innings’, she said, “It’s a new experience, and I’m feeling like a newcomer all over again.”

Jhanvi posted in remembrance of her stunning Mom, Sridevi. 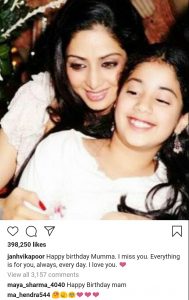 Chandani actress said,” With every film, you feel new. You feel excited and unsure about yourself. You are insecure, and you are thrilled. So many feelings put together. So, it’s special. When Sridevi asked she is insecure in front of camera? Her reply was, “Yes, well, sometimes. I always wonder if I have done the job right. Even after seeing the film, I wish I could have done a better job.” “I am never satisfied with my work. Even though the director and my family always say it is good, I am not happy.” She added. She is the best female comedian of her time, are you funny in real life? “Yes, my husband calls me a joker. My daughter says, ‘Ma, my friends think you are very cool.’” she replied. 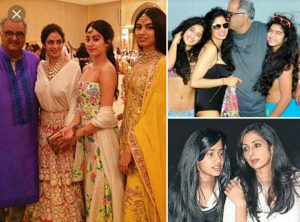 As a wonderful mother, she also explained about her views on motherhood and which type of mother she is… “I’m a very protective mother, but I’m not possessive. There was a time I thought I’ll ensure my daughters get settled and I get them married. But that’s wrong because I also want them to be independent, and they should take up a profession where they can stand on their own feet. But when Janhvi took up acting as a profession, like any mother I felt possessive. I know this profession has given me everything in life, but it also meant giving away your life out in the open. So, when I got to know her choice, I was taken aback.”

“I’ve never told Boney ji ever, but I’ve always loved working with him. He is not one of the best, but the best producers. I’ve seen him closely going out of the way and fulfilling the wishes of his technicians. He’s a passionate producer and I’ve shared the same wavelength with him.” She said about her husband also.
Unfortunately, Sridevi faced an accident in Dubai which leads to her death, shortly before Janhvi’s debut film, Dhadak, came out.