Actor Kangana Ranaut has reacted to Taapsee Pannu’s statement where she had said in an interview that she does not miss Kangana’s presence on Twitter as she doesn’t hold any relevance in her life. Taking to Instagram stories, Kangana claimed in a long post that Taapsee ‘begs’ producers for films rejected by Kangana. 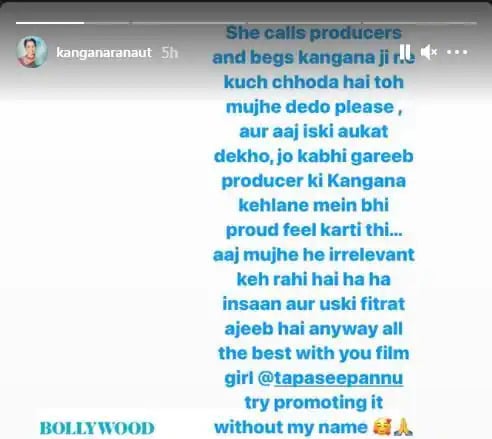 She further called her ‘gareeb producer ki Kangana’ and wrote, “She calls producers and begs kangana ji ne kuch chhoda hai toh mujhe dedo please, aur aaj iski aukat dekho, jo kabhi gareeb producer ki Kangana kehlane mein bhi proud feel karti thi… aaj mujhe he irrelevant keh rahi hai ha ha insaan aur uski fitrat ajeeb hai (She calls producers and begs them to give her any films I turned down, and look at her today. She was once proud to be called the Kangana for poor producers and today, she calls me irrelevant. Haha, people and their strange nature) anyway all the best with your film girl @tapaseepannu try promoting it without my name.” 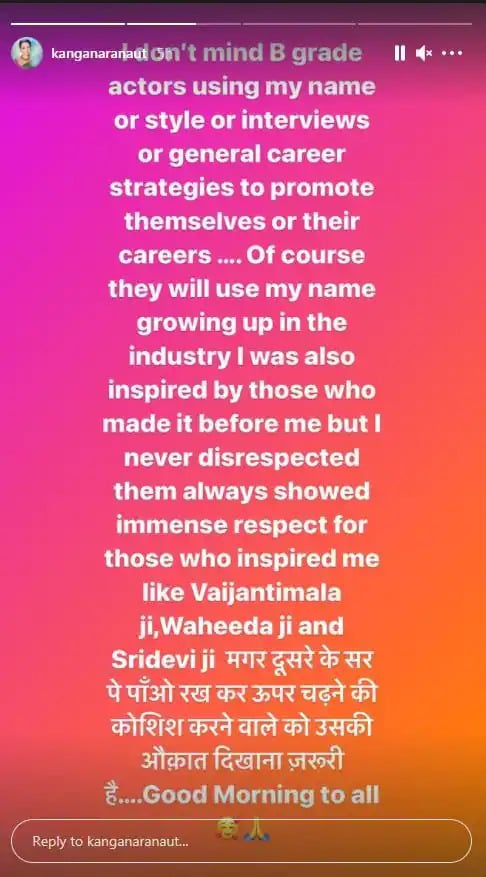 In another Instagram story Kangana wrote, “I don’t mind B grade actors using my name or style or interviews or general career strategies to promote themselves or their careers ….Of course they will use my name growing up in the industry I was also inspired by those who made it before me but I never disrespected them always showed immense respect for those who inspired me like Vaijantimala ji,Waheeda ji and Sridevi ji. Magar doosre ke sar pe paon rakh kar upar chadhne ki koshish karne wale ko uski aukat dikhana zaroori hai (The ones who try to climb higher by pulling others down need to be shown their place). Good morning to all.” 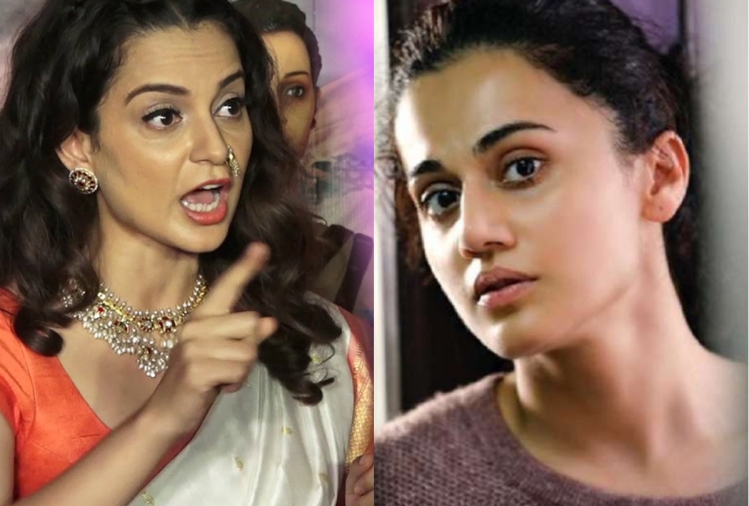 Earlier, speaking about Kangana’s absence from Twitter, Taapsee told Hindustan Times, “I don’t miss her. I didn’t miss her or want her before also. She’s too irrelevant for me, in my personal life. She’s an actor, she’s a colleague in that respect. But more than that, she doesn’t hold any relevance in my life. I don’t have any feelings for her, good or bad. And I think hate and love both come from the heart. If you hate someone, it comes from the heart. But the worst is when you don’t care; when you’re indifferent towards that person; when that person doesn’t hold any value or relevance in your life. I think that’s the worst feeling a person can have for the other. And that is that, so it doesn’t matter to me.” 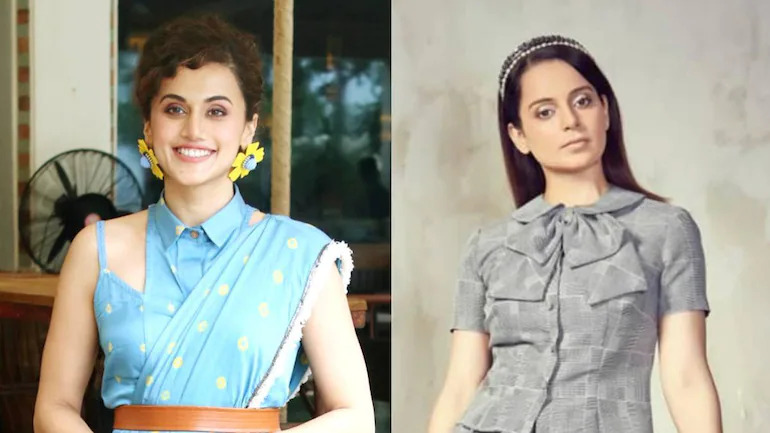 Meanwhile, on the work front, Kangana is awaiting the release of Thalaivi, where she will be seen playing the role of J Jayalalithaa. She also has Dhaakad in the pipeline. She has also announced the sequel of Manikarnika which is based on the chronicles of ‘The Cleopatra of Kashmir’s Didda’ who rules the valley during the 10th and 11th centuries. She has also announced Aparajita Ayodhya, which is based on the Babri Masjid demolition incident and a yet-to-be-titled film based on the exodus of the Kashmiri Pandits. Taapsee Pannu, on the other hand, has Haseen Dilruba, Shabhash Mithu, Dobaaraa, Rashmi Rocket, Loop Lapeta, and Woh Ladki Hai Kahan? In her pipeline.