Bollywood stars that have been known for their social life and they keep sharing their social life on social their Instagram profile. One can easily ensure that they would be able to make up the celebrity’s lifestyle and travel adventures on Instagram. Katrina Kaif is another Bollywood actress who is constantly posting her behind the scene pictures on social media. Recently, she shared another picture on Instagram and was trolled by her co-star Arjun Kapoor.

Kat looked stunning as ever, as she posed for the camera in a white T-shirt, curly hair and no makeup. The actress captioned her picture with a coffee mug’s emoji, guess, she was craving for caffeine and had one. And Arjun Kapoor, for the naughty person that he is, seemed to have taken Katrina Kaif’s case. According to him, the emoji didn’t go well with her picture and he teased the actress saying that is she hinting at joining Karan Johar for Koffee With Takht. “The emoji has nothing to do with the picture Katrina…. is that clue for Karan to join u for Koffee on Takht????” 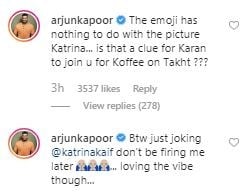 Soon after the actor wrote another comment apologising the Tiger Zinda Hai actor out of fear, “Btw just joking @katrinakaif don’t be firing me later… loving the vibe though.” However, Kat seemed to have played along and replied to his comment saying, “@arjunkapoor this is the body language when one drinks coffee.”