Madhurima Tuli has “requested” Colors channel to avoid recreating the Bigg Boss 13 scene where she had hit Vishal Aditya Singh with a frying pan. The incident was re-created on Khatron Ke Khiladi 11 where Vishal is a contestant. Bigg Boss 13 contestant Madhurima Tuli is upset with the entertainment channel for recreating an infamous sequence that took place between her and her ex-boyfriend Vishal Aditya Singh. It was recreated on Khatron Ke Khiladi 11. Expressing her discomfort, Madhurima said in the video, “Hi guys! This message is for Colors channel. Dear Colors channel, honestly, I did not want to make this video. I had no choice because I can no longer bear with it. I have done so many shows with you, I have done Chandrakanta, 24, Bigg Boss, and I enjoyed doing them all. But I am very very sad and disappointed with one thing. You are dragging this one incident that happened, just for your TRPs. But you do not care what effect it has on the family of those involved. What happens in their lives, how depressed they are (watching all this), how disturbed they are watching the incident time and again. They want to forget it all.”

She added, “And there were other things that happened in the same house; for example, hot tea was thrown on someone, people were pushing and hitting others. None of that is being repeated. People come back to your channel, host shows and earn respect. Why don’t you plan it in a manner that you throw tea on the person when they come on set to host a show, repeating what happened on the same Bigg Boss season? Then it would be balanced. I can think that they are doing it to everyone. Maybe you are doing this with me, thinking I do not have enough fans to stand with me. Highlighting the same thing again and again, you are hurting me, my family and fans. I would request you to not show this again and again. I am trying to get past the incident,” she concluded. 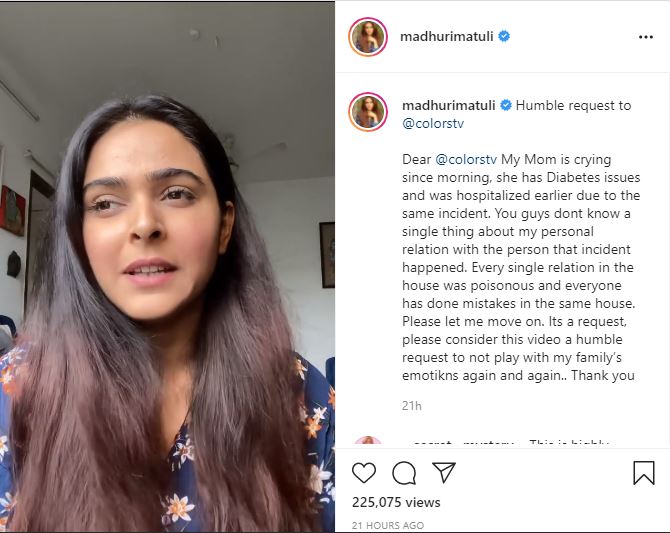 She shared the video and wrote on Instagram , “Humble request to @colorstv Dear @colorstv My Mom is crying since morning , she has Diabetes issues and was hospitalized earlier due to the same incident. You guys dont know a single thing about my personal relation with the person that incident happened. Every single relation in the house was poisonous and everyone has done mistakes in the same house. Please let me move on. Its a request , please consider this video a humble request to not play with my family’s emotions again and again.. Thank you.” 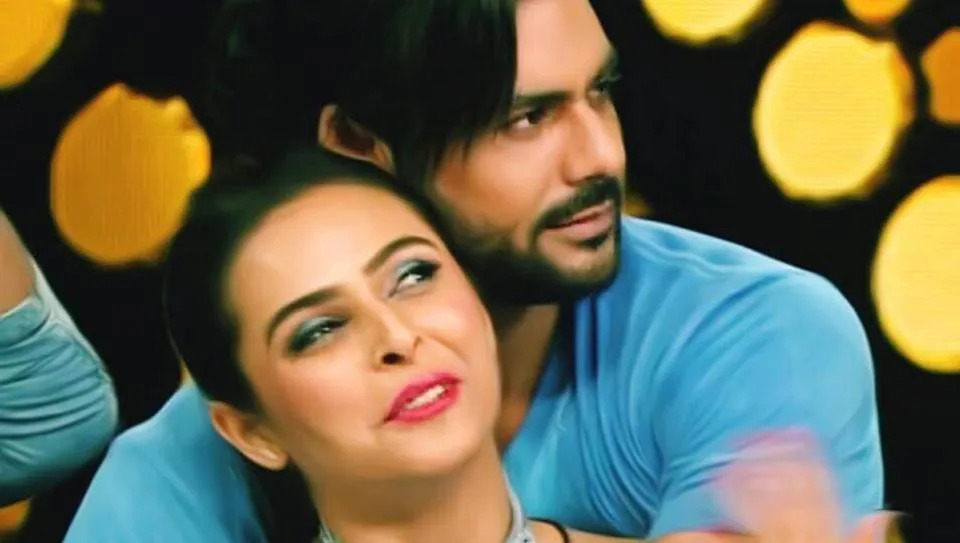 Madhurima and Vishal Aditya Singh were together for some time before they broke up. They first appeared on Nach Baliye 9 as an ex-couple but they had bitter public fights. After Vishal entered Bigg Boss 13 as a wild card contestant, Madhurima soon followed suit. While they started on a friendly note, their journey was full of heated arguments.Madhurima was thrown out of Bigg Boss 13 after she hit Vishal with a frying pan during one of their fights. After the show, both the actors claimed t they were done with each other.