Malayalam superstar Mohanlal started this year with the release of Drishyam 2. The film premiered on Amazon Prime Video in February 2021. After nearly four months, Drishyam 2 was released in theatres in Qatar, Oman, and UAE. Mohanlal shared a new poster of Drishyam 2 and shared the happy news with his fans and followers. Drishyam 2 is a mystery thriller, directed by Jeethu Joseph. 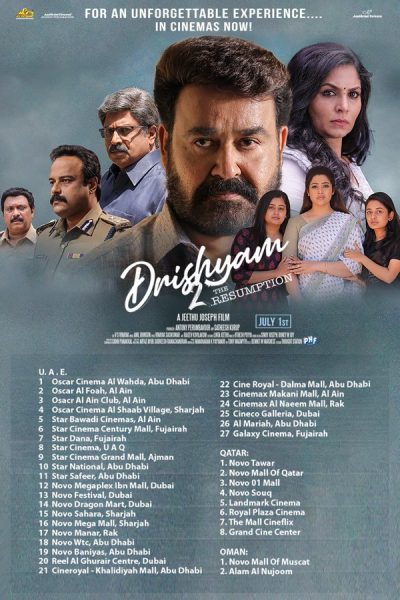 Drishyam 2 impressed the critics and audience when it was released early this year. After nearly four months, the film is gracing the theatres in UAE, Qatar, and Oman. This is the first Indian film to get a theatrical release after an OTT premiere. On Wednesday (June 30), Mohanlal shared the poster of Drishyam 2 and wrote, “For those of you in UAE, Qatar, and Oman, #Drishyam2 finally reaches the big screen. Releasing tomorrow! (sic).” Mohanlal and director Jeethu Joseph reunited for Drishyam 2, a sequel to the film of the same name. The film was released amid huge expectations and managed to live up to it. The actor took to Twitter to thank everyone for their response to Drishyam 2. 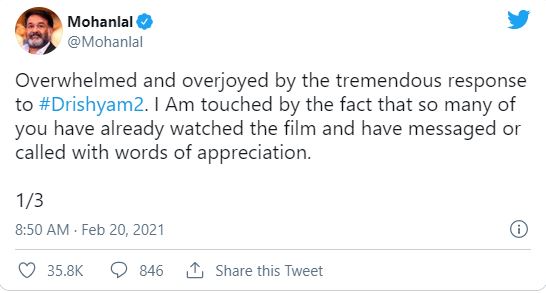 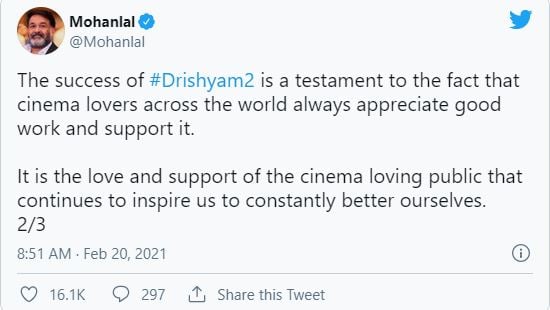 The Drishyam actor wrote, “Overwhelmed and overjoyed by the tremendous response to #Drishyam2. I Am touched by the fact that so many of you have already watched the film and have messaged or called with words of appreciation. The success of #Drishyam2 is a testament to the fact that cinema lovers across the world always appreciate good work and support it. It is the love and support of the cinema-loving public that continues to inspire us to constantly better ourselves (sic).” Produced by Antony Perumbavoor, Drishyam 2 stars Mohanlal, Meena, Murali Gopy, Ansiba Hassan, Esther Anil, Asha Sarath, and Siddique in lead roles. The film is being remade in Telugu and Hindi as of now. 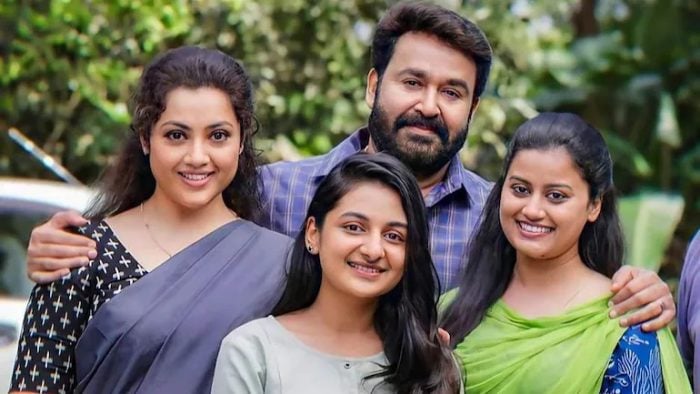 The film tracks the life of Georgekutty and his family, six years after the prequel. Although Georgekutty, the prime suspect of the Varun case was let free, due to the lack of any evidence, rumors about his involvement are still the talk of the town. And Georgekutty’s growth from a farmer to a theatre owner has only added fuel to the fire. The police re-opening the case and how Georgekutty and his family deal with it forms the crux of the ‘Drishyam 2’. Although most of the time, sequels to blockbusters struggle to keep up with the hype, ‘Drishyam 2’ is an exception. Jeethu Joseph has brilliantly crafted the sequel and is as gripping as its prequel.