Singer Neha Bhasin has been ruling the headlines since she made her entry in Bigg Boss OTT. Her closeness with co-contestant Pratik Sehajpal became the talking point of her journey. She later entered Bigg Boss 15 as a wildcard. In the main house, Neha was seen arguing with Pratik. However, she got evicted from the show again and after that, the singer is receiving a lot of hatred from Pratik Sehajpal’s fans. The Dhunki singer even got into an argument with his sister, Prerna Sehajpal on Twitter. However, now the singer has decided to take a break from social media after becoming the target of trolls. 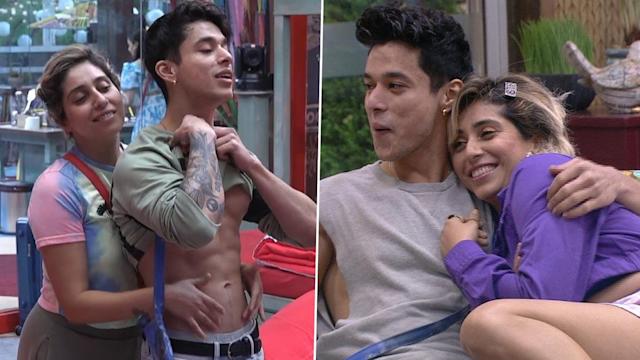 Neha in her earlier posts had threatened Pratik’s sister to expose her brother and claimed he’s pretending to be single on the show when he is not.

Before going off the media, Bhasin shared an unseen video from Bigg Boss 15, where Nishant Bhat is telling Pratik Sehajpal that he always needs someone’s support 24/7. And surprisingly, Pratik is also seen accepting the fact. He is heard saying that“Yahi to issue hain mere, I have an issue man,” further the Nishant jokingly said, “You’re full of issue, mera naam Nissue hai but ‘issue’ ke sath tu hai.”

While sharing the video, she wrote, “To everyone who doubted me, abused me, witch-hunted me and blamed me for being honest, affectionate and even sacrificing my stint on BB I rest my case. Taking a break from SM. I would’ve kept quiet if I wasn’t continuously shamed for others’ patterns. Time to forgive and forget.” 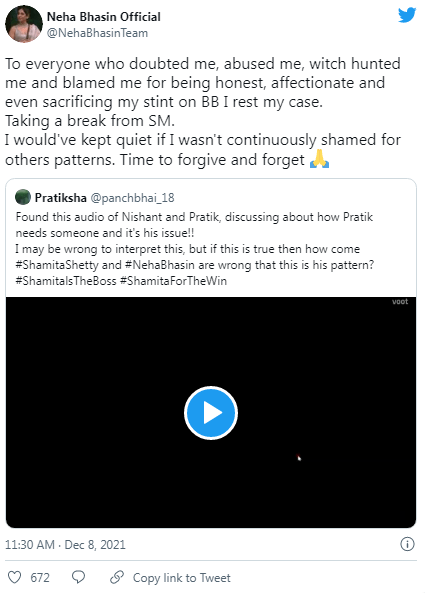 In her earlier tweets, Neha blamed Pratik’s sister Prerna and claimed because of her the singer is receiving such negativity from netizens.