Nick Jonas Poses In Kurta In New Pic; Fans Wonder If Its From A Ceremony For His & Priyanka Chopra’s Baby Girl

Nick Jonas wore a kurta as he posed in a picture shared by Pandit Manju Dutt, who has officiated pujas for him and Priyanka Chopra in the past.

American singer Nick Jonas, married to Priyanka Chopra, left his Indian fans impressed as he posed in a kurta in new pictures. It appeared that Nick had donned the attire for a puja ceremony at his and Priyanka’s home in Los Angeles. Desi fans showered Nick with compliments over his look and said he is looking handsome. Many even wondered what occasion was the puja for. The picture was shared by Pandit Manju Dutt on his Instagram account on Saturday. He has performed pujas for the couple in the past as well. He captioned the picture, “With Nick Jonas today.” Nick wore a blue kurta as he posed for the picture with the priest, and also had a tika on his forehead. A patio next to a pool could also be seen in the picture.

Fans commented on heart and fire emojis in the picture. A fan page shared the image with the caption, “New picture of our national Jiju today.” Another fan commented, “Jiju looks so handsome in his kurta.” One wrote about him and Priyanka Chopra, “Favourite couple.” A fan commented, “Looking handsome. many blessings to our favorite couple and their family!”

Others tried to guess the occasion for which the pooja was being held. A fan wrote, “I wonder what ceremony they were having.” Commenting on the picture shared by a fan club, one fan wrote, “Hoping is the ceremony I think.” Another fan wrote, “Is this from some ceremony for a baby?” Priyanka and Nick became parents to a baby girl via surrogacy in January. Recently, TMZ revealed that her name was Malti Marie Chopra Jonas.

Meanwhile, Nick and Priyanka celebrated the second birthday of their dog Panda. Priyanka took to Instagram Stories to share pictures of her husky, and wrote, “Happy birthday to our little hunk punk of madness…Here’s to an endless amount of love and belly rubs from me and dad @nickjonas.” 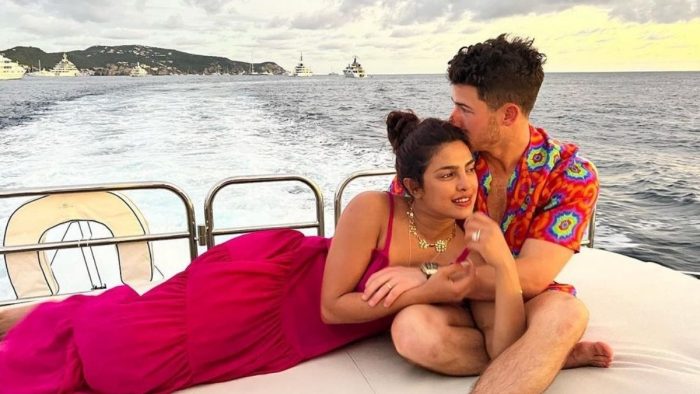 Nick also shared a TikTok video in which Priyanka fed dog cake with Panda written on it to Panda and their other pets. Nick captioned it, “Happy birthday @pandathepunk we love you! @priyankachopra.”

Priyanka was last seen on screen in The Matrix Resurrections. She will be next seen in the Hollywood rom-com It’s All Coming Back to Me, and the Amazon Prime Video web series Citadel. She will also be seen in Farhan Akhtar’s Jee Le Zaraa alongside Katrina Kaif and Alia Bhatt.