Desi Girl is quite popular now. Former Miss World Priyanka Chopra is not just an actor in India’s Bollywood, she is now an international star. The former beauty queen has earned a lot from flicks, ads, and several brand endorsements. She is the most followed Bollywood actress on Instagram. And yet she has always been a target for trolling. And it can never be justified. Even if they are right or wrong, they are always judged, celebs often have to go through virtual attacks by trolls over some of the most insane and absurd reasons.

Recently, a picture of Priyanka Chopra went viral on the internet where she was smoking along with mother Madhu Chopra and husband Nick Jonas on a yacht during her birthday vacation in Miami surfaced online. The moment the picture went out, Netizens started trolling the actress for smoking despite as she claimed that she is an asthmatic patient. Also, on Diwali, she has asked everyone for ‘no crakers’. And now, she is been trolled again for another reason. Priyanka Chopra took her official Instagram handle to share a video clip wherein she was doing an advertisement based on alcohol. And she is in the news again for all the wrong reasons. Have a look at the trollers:

Life's about constantly reinventing yourself. You have to make every opportunity count, take risks and create your own path. Everyone’s success is their own, it's what you've earned…it's your Pride. #MyLifeMyPride #BlendersPrideFashionTour #Ad 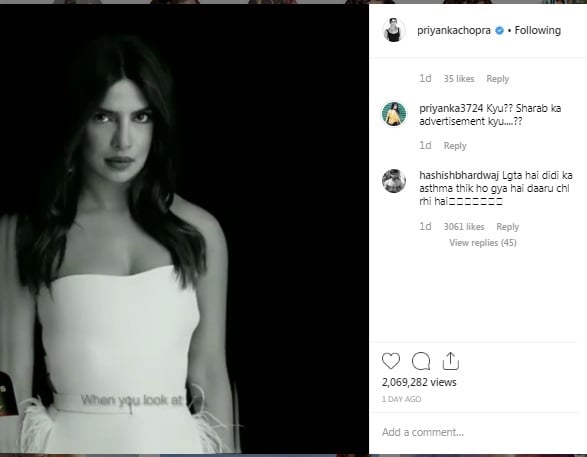 Priyanka has always been an easy target for trolling. Sometime back, a few pictures that have surfaced online shows Priyanka taking a stroll down the streets of the New York City along with Nick Jonas and Diana Chopra. While Priyanka comfortably pulled off her evening look, Nick opted for a leopard print shirt and navvy blue pants. She is walking her dog Diana Chopra and from the look of her dress, it is clear that she isn’t wearing a bra understand this sheer maxi dress. On the work front, Priyanka Chopra is busy shooting for her Bollywood film The Sky Is Pink. The first look of the film was recently revealed online wherein Priyanka along with Zaira Wasim, Farhan Akhtar and Rohit Saraf were seen facing the sunset.

In the movie, Priyanka and Farhan play Zaira’s onscreen parents while Rohit will be seen playing the role of Zaira’s on-screen brother. The movie is set to release on October 11.