Shah Rukh Khan has praised the debut of the first-ever women’s team for his Knight Riders organization. The inaugural Women’s Caribbean Premier League (WCPL) will feature the Trinbago Knight Riders women’s team this season. Additionally, the actor expressed his want to witness them perform live at the WCPL, which will begin on August 30. 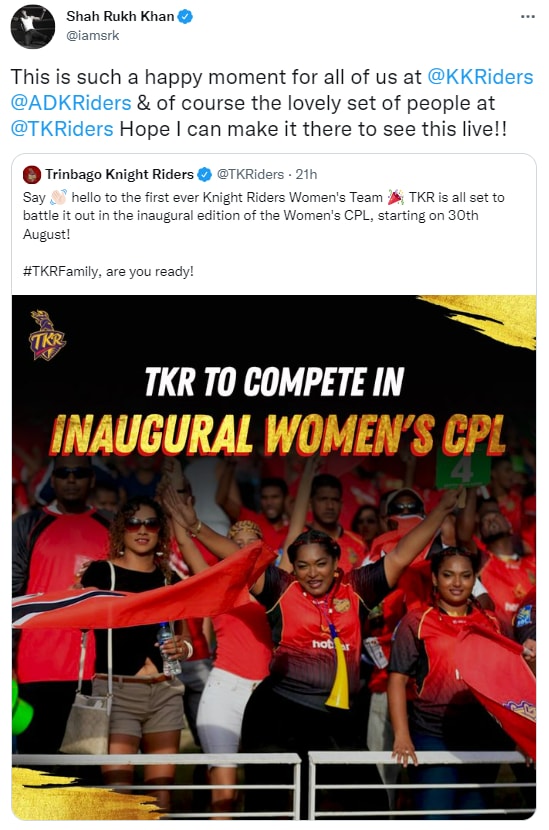 Barbados Royals and Guyana Amazon Warriors are the other two teams who have officially joined the league in addition to TKR. The women’s CPL and men’s CPL will take place simultaneously.

Shah Rukh missed the IPL auction in February of this year. He and star Juhi Chawla are co-owners of the Knight Riders Group. The actors were represented at the ceremony by Aryan Khan, Suhana Khan, and Jhanvi Mehta, the daughter of Juhi. Later, during the 2022 IPL, Suhana, Aryan, and their younger sibling AbRam went to watch KKR’s games in Mumbai.

Shah Rukh is currently getting ready for his over four-year absence from the big screen. The actor most recently appeared with Katrina Kaif and Anushka Sharma in his 2018 film Zero. In Siddharth Anand’s Pathaan, which also stars Deepika Padukone and John Abraham, he will next be seen. His current project is Jawan, a movie directed by Atlee. In development with Taapsee Pannu is Dunki, directed by Rajkumar Hirani.