The nameplate of Shah Rukh Khan’s Bandra home Mannat has been missing from its usual spot for a couple of weeks now. Puzzled fans have taken to social media to share this.

Last month, Shah Rukh Khan’s Bandra home Mannat was trending on social media after fans noticed that the gate of the popular bungalow had a new nameplate after years. Several fans shared pictures and selfies from the spot causing the bungalow to become a talking point. Over the last few days, the bungalow and its nameplate have been talking points again. This time, however, it is because fans have noticed the nameplate is missing, something which has hardly ever happened earlier.

Mannat is a popular tourist destination in Mumbai on account of being Shah Rukh Khan’s home and as it is situated right across Bandra’s Band Stand. Many fans reach the gates of the house every day to click pictures with the Mannat nameplate. However, over the last two weeks, several fans pointed out that the nameplate was missing. On May 12, a fan tweeted a video from outside Mannat and wrote, “I went to #Mannat today first time in my life and I saw there is no nameplate. I thought there is some work in progress.” Another tweet from the same time showed a picture of the façade of the house with a similar caption. Till Thursday, the nameplate was still absent as evident by several tweets shared by fans from Mannat.

Several fans have wondered if it was stolen, but others have pointed out it is unlikely given the security situation at Shah Rukh’s house. Some even wondered if it was part of some interior (exterior?) design experiment of Gauri Khan. A tweet from May 11 read, “Aaj #Mannat se nameplate gayab hai matlab full-on experiment chal raha hai @gaurikhan (Today the nameplate is absent from Mannat, which means experiment is on).”

However, it seems there may be no mystery at all as the nameplate is simply being repaired. A report from Hindustan Times City quoted a source saying, “It was taken down for repair. It’s inside the house, in fact in the garden, and will be put back once it’s repaired.” 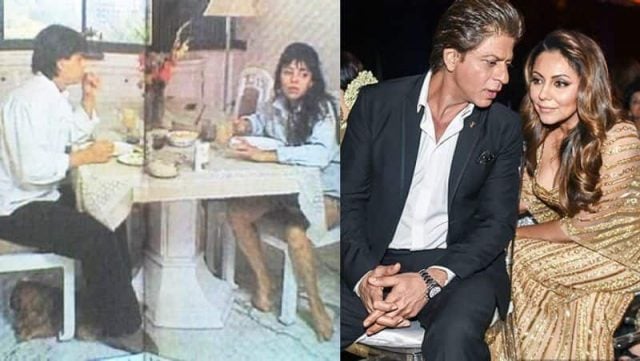 The Mannat nameplate has become a favourite selfie spot for fans over the years. Recent reports even claimed that the new nameplate–which was installed in April–was worth around ₹25 lakh. However, these reports could not be verified.

Shah Rukh recently appeared to fans from the Mannat viewing balcony for the first time in almost three years. On the occasion of Eid, Shah Rukh greeted fans and even clicked selfies with them. Till a few years ago, the actor routinely greeted fans from the spot and even brought his kids with him at times. His appearances, however, have been sporadic since the pandemic hit.