Bollywood’s queen Kangana Ranaut recently watched Dulquer Salmaan and Mrunal Thakur’s period film Sita Ramam. The actor, who is busy shooting for her upcoming drama Emergency, in which she stars and directs, took to Instagram to praise Sita Ramam.

In a series of messages shared on Instagram Stories, Kangana said the film had ‘extraordinary screenplay and direction.’ She gave a special shout-out to Mrunal. She said that ‘no other actress could have portrayed’ the role of Princess Noor Jahan like her. Noor Jahan is known as Sita Mahalakshmi too. 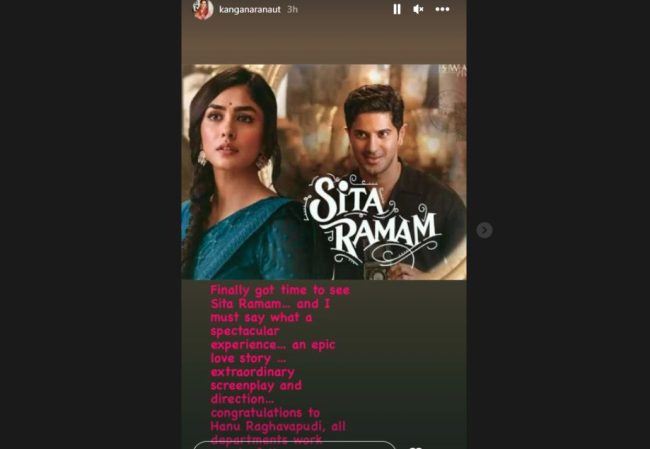 The Telugu-language romantic drama, written and directed by Hanu Raghavapudi, features Dulquer as Lt. Ram, an Indian army officer working on the Kashmir border, who receives an anonymous love letter from Sita Mahalakshmi, played by Mrunal.

Kangana reviewed the film. She said, “Finally got time to see Sita Ramam… and I must say what a spectacular experience… and epic love story… extraordinary screenplay and direction… congratulations to Hanu Raghavapudi (director), all departments work wonderfully (in the film).”

She said ‘all actors did amazingly well’ in the film but what stood out for her was Mrunal’s performance. She said the casting of the film was ‘terrific.’ She added, ” “All actors did amazingly well but what stood out the most for me (was) Mrunal Thakur’s performance. Restrained emotions and rare dignity in her demeanour… no other actress could have portrayed. What a terrific casting. Truly a queen. Zindabad Thakur Saab (madam), here begins your reign…” 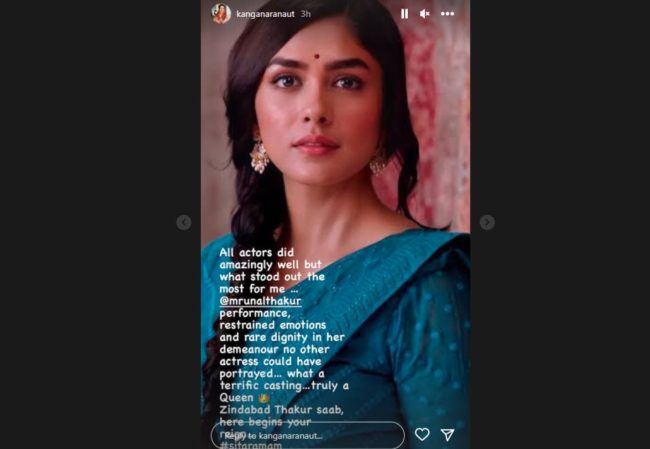 Sita Ramam team got a long letter from Polan from a fan. The fan showered love on the film. Dulquer reacted to the letter. He tweeted, “This is beautifully written. With a lot of sensitivity to the talent, you have written with a great understanding of the film itself and the cinema it is from. Lots of love to you. And hope we can continue to entertain all of you.” Reacting to it, Mrunal had written, “I can’t express in words how happy I am! You certainly made my day.”