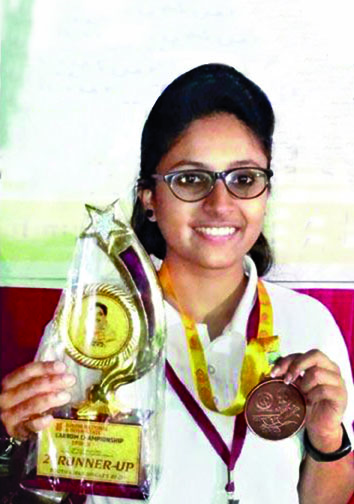 Some are bound to die young, by dying young a person stays young in people’s memory. If he or she burns brightly before he or she dies, his or her brightness shines for all time.

State-level carrom player Janhavi More was killed in a road accident in Dombivli on Sunday, days ahead of her participation in the national-level championship. More was crossing the road at a busy junction near her house, Lodha Heaven, when she was hit by a speeding truck and was declared dead at a nearby hospital minutes later.

Coached by her father since the age of five, the 20-year-old aimed to represent India in carrom. The champion’s family has blamed congestion, poor traffic management and dysfunctional traffic signals for her death, and callous attitude of the transport constable and the high speed driving of a tanker driver.

A student of Modern College, Dombivli, More was not eligible for the nationals senior level tournament last year as the list was declared before she turned 20 in December.

She was practising very hard to be a part of the championship this year. Her hard work and talent have led to 13 medals so far in the national junior championships and 21 at the state level. She was very good in her studies too. She died at a young age and the carrom fraternity lost an able player at the junior and senior level.

As a carrom lover, I saw her play through videos and observed that she is concentration personified and her confidence level is high when she is going high up in the ladder. She plays a steady game and very good in pocketing straight coins and the cut stroke is simply phenomenal. She dethrone her opponents

with consistent performance and made a match of it when she

was down at crucial moments of the game.

It is a great loss to the game as she was blooming into a next generation player.

Janhavi, in her five-year career won 68 medals, spanning championships from district to national levels. She had a bright future at the national level in the under-21 age category. The family of More lost a loving personality and the carrom-loving public lost an enchanting player with high promise and great talent. Sporting success of Janhavi was nipped in the bud and it is a loss to the satellite city.

A loss to the satellite city.   By C. K. Subramaniam