The Calm After The Storm Forgiving indiscretions. 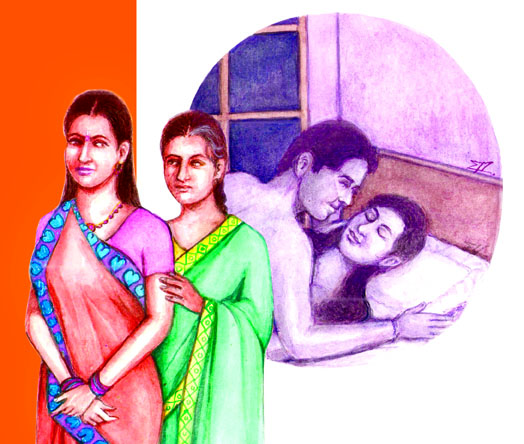 “Mina, Advaid is really such a good boy. Don’t let this incident spoil your life.”

I will never forgive him. Not now. Not ever.” Mina looked defiantly at her mother, in spite of the tears that burked in her limpid eyes. “How could he cheat me like that? Belie my trust?”

Savitri tried to soothe her angry daughter. “But, Mina, he told it you didn’t he? He could have kept it to himself.”

“Oh, he jumps into bed with a call-girl and you condone it. How can you, ma?”

“Mina, I don’t think he did the jumping. By all that I can assume of call-girls in a five-star hotel, the jumping must have come from her side. The promiscuous bitches with their revealing clothes and come-hither looks. They can tempt even a statue. Don’t take it too much to heart, dear. I’m sure Advard won’t repeat such a thing. He loves you, you know that. Forgive him, Mina. He is human after all. He didn’t want this skeleton in his cupboard and that’s why he made a clean breast of it. Put it out of your mind, and go back. But Mina shook her head vehemenlty.

“I am not going back. Not even wild horses will make me. Not even if he begs me on bended knees.” Savitri sighed. She knew how stubborn her daughter could be. Even in childhood it had been apparent. She would refare to go to school if they didn’t buy her a poppy umbrella she wanted, or she didn’t like the hair clip Savitri had fixed her hair withVivek older than Mina by four years was the doute one who, unlike Mina, had never been any trouble. He had come down from the states for Mina’s wedding, the year before he had a good job there and the parents were on the look out for a suitable girl for him.

Mina, on the other hand, had a will of her own. The parents were surprised and happy when she agreed to marry the boy the parents had chosen for her. Adward was a stable youngster, well-mannered, good looking and come up to the parents expectations. They knew they were entrusting their daughter to good hands.

And now this just a year, and the marriage was on the rocks. Not surprising in the present era, when couples got separated even before the wedding bouquet faded. Any flimry reason was enough for the boy and girl to cry quite.

“Good boy my foot!” Mina flared. “Do good boys fall into such a trap at the first opportunity?” Adward had gone on an official tour, where presumably he had put up in a five-star hotel for the night. From what Savitrigalthered from Mina, when she came home in a royal hulfaccuringAdward, was that he had made out with a call girl in the hotel.

In fact, though Adward steered clear of drinks except perhaps for a peg or two to keep company that right he had been to a party, where friends had forced him to get a bit drunk. When he went bad to his hotel he had not been his usual normal self. The inebriated condition he was in and the temptation offered by the call girl, who had thrown herself at him, had made him commit the crime Mina was not going to forgive. She was adamant about it. Mina looked at her mother and said “Ma, I have grown up in this house, seeing the way that dad treats you. It is obvious in so many ways’ that you both love each other deeply, even after so many years. Dad would never have cheated you. But supposing, just supposing he did, how would you have reacted. Would your love have been strong enough to forgive him, ma? Tell me.”

Savitri took a deep breath and the words came out quietly, softly.

“What? Are you saying dad cheated on you?

“Mina, it happened long ago and I wouldn’t be telling you this, except for the present circumstance.”

“No, not a whore. It happened with his secretary your Rita aunty of course, she is old now. But there was a time when she was young and pretty and she was dad’s secretary?”

You are telling me dad had an affair with her? Mina sounded shocked.

I’m telling you nothing of the sort. Shankar has always been faithful to me in his heart – loving, caring, the best husband I could wish for.

“But then what happened?”

“Rita was his secretary married to a boy she loved with her heart and soul. But they had just 10 months of married life. He was killed in a road accident, leaving Rita to mourn Joseph’s loss. She had just started working for dad then. Shankar had to go on an office tour and he took Rita along. They had adjacent rooms in a hotel. I had implicit trust in them both, and it did not worry me. In fact Rita and I had become friends and I knew how much she grieved for Joreph. I myself had often tried to cheer her up.

“Well that night in the hotel Shanker had a bad headache and he went into Rita’s room. He found her room in darkness and she was sitting in a chair, tears streaming down her face. It was the first death anniversary of Joreph, and she was weeping for him. Shanker was so sorry for her, he held out his arms to comfort her. And then somehow it happened – not out of lust or passion but pity and solace. Even then Rita’s mind was on Joreph. What could have been but never would be again.

Shanker confessed to me. At first I was shocked, but can one sexual indiscrimination hold to ransom the love and trust we had for each other? I forgave him and I have no regrets. You have seen how happy we are. Rita came to me, and offered to resign. But I did not allow her to. We just buried it in a dead past. Now, Mina don’t you feel you can forgive Advaid?”

Mother and daughter hugged each other as Mina smiled,” Yes…ma.”

And after the storm, there was the calm. 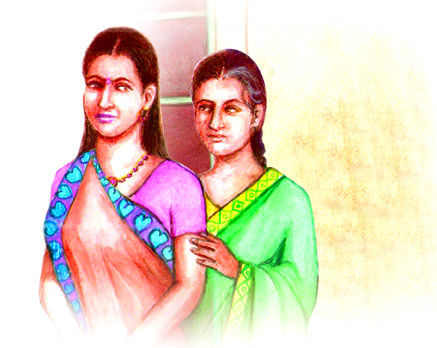