Twinkle Khanna remembered their late father Rajesh Khanna on his ninth death anniversary and says ‘He still lives on.’

Bollywood legendary star Rajesh Khanna is often called the ‘ Original superstar’ of Hindi Cinema and also one of the biggest romantic heroes on screen.

Former actress Twinkle Khanna on Sunday remembered her late father Rajesh Khanna on his ninth death anniversary with a heart-warming video of the superstar from the sets of his 1974 film, Aap Ki Kasam. The video features Rajesh Khanna shooting his solo portions for the popular song “Suno Kaho Kaha Suna” which also starred Mumtaz.

Later filming the bits, Rajesh Khanna is seen speaking to a journalist about his experience of shooting the song. “I liked this. It was better than running around trees. It’s running around rocks,” Khanna, hailed as one of the biggest romantic heroes ever in Hindi cinema, had a tongue-in-cheek reply. When asked if he had problems with multiple takes before getting the right shot, the actor said, “Not at all. I liked this part. I liked doing it again and again.”

At the end of the short clip, Rajesh Khanna said what mattered in the romantic song was the synchronization between his expressions and the beat of the track. “Once you get the correct beat and the action is executed on it, there’s always an appreciation.”

Alongside the video, Twinkle wrote a heartfelt caption. “I have his eyes, my son has his smile and the world has pieces of him embedded in their hearts. He still lives on…” Rajesh Khanna passed away on July 18, 2012, at his Mumbai residence following a prolonged illness. 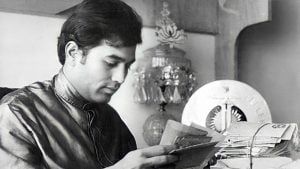 Rajesh Khanna was an Indian actor, film producer, and politician. Dubbed the “First Superstar” of Bollywood, he starred consecutively in a record 15 commercially successful films between 1969 to 1971 and was the highest-paid actor in Hindi cinema throughout the 1970s and 1980s.

His awards include four BFJA Awards and five Filmfare Awards, and in 2013, he was posthumously awarded the Padma Bhushan, India’s third-highest civilian honor.