Twinkle Khanna shared her thoughts on Aryan Khan’s arrest comparing it to Squid Game. In a post shared on Instagram, Twinkle compared Aryan’s drug case to a game that appeared on the hit South Korean drama series. She shared a post titled “Let the Desi Squid Games Begin”, citing a game of marbles from one of the episodes and presenting her point of view on the arrest of Shah Rukh Khan’s son.

“Each player is given ten marbles and must get their opponent’s marbles by competing in any game of their choosing. In this episode, one of the strongest candidates is badgered and ultimately bamboozled into losing his marbles. I seem to have misplaced mine as well when I read the news about Shah Rukh Khan’s son’s arrest,” she wrote. 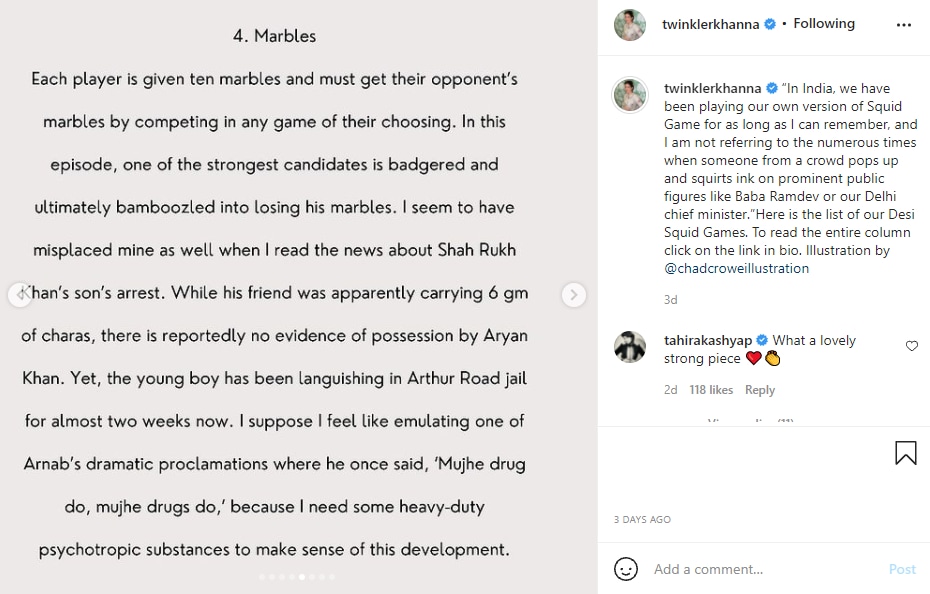 “While his friend was carrying 6 gm of charas, there is reportedly no evidence of possession by Aryan Khan. Yet, the young boy has been languishing in Arthur Road jail for almost two weeks now,” she added.

Twinkle then turned to a popular news anchor and said, “I think I want to emulate one of Arnab’s dramatic proclamations where he once said, ‘Mujhe drug do, mujhe drugs do,’ because I need some very potent psychotropic substances for me to makes sense to do  “This development”. Aryan was arrested earlier this month after the NCB raided a group of cruise ships on a cruise to Goabound. Aryan was detained by the Office of Narcotics Control. The Special Narcotics and Psychotropic Substances Court will decide on Aryan’s bail suit on Wednesday.

Shah Rukh Khan’s family is supported by several industry stars. Salman Khan has been photographed visiting Shah Rukh’s residence many times since Aryan’s arrest. Hrithik Roshan, Sussanne Khan, and Pooja Bhatt are among the few celebrities who have used social media to show their support for Shah Rukh and his family.