Besides being a great actress, Hema Malini is also known for her dancing. The actress is a trained Bharatanatyam dancer and made sure her daughters Esha Deol and Ahana Deol also learned the classical dance form. But did you know that their father, actor Dharmendra, was initially against Esha and Ahana for learning to dance? 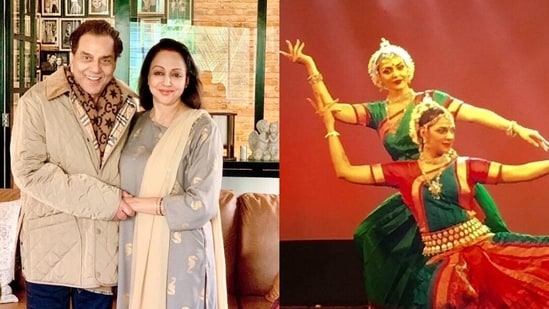 In a 2011 magazine interview, Hema revealed that while she had a modern approach to parenting, whereas Dharmendra came from a conservative mindset. He did not want them to learn to dance, but Hema did not approve of his ideology.

“Initially he was so conservative that I was shocked! He would tell the girls not to wear short tops with tight-fitting jeans, and I would be like no, you live in an ancient time! If the girls were dressing up or applying makeup, it was a natural thing to do at their age. As a father, he used to be vexed that the girls would join the film line. So sometimes I had to intervene and tell him not to interfere in all this,” she said. Dharmendra also once voiced his objection to learning to dance Esha and Ahana. “Don’t teach them to dance? They will join the film industry,” He would tell Hema. However, Hema was adamant too. “I could not let that happen! I am a different person and have taught them to have their thoughts and voices. My children like the fact that if there is a need, they can use me as a shield, against the world,” she added.

Today, Esha and Ahana are Bharatnatyam dancers. On some occasions, they also performed with Hema.

Hema turned 73 on Saturday. While the actress is no longer actively involved in movies, she recently reunited with Amitabh Bachchan and director Ramesh Sippy for a special reunion episode of Sholay on Kaun Banega Crorepati. Hema was also been busy with her political career.