Who Is KRK: Why Does Bollywood Hate Him?

Actor/Producer/Critic. If you still don’t know who Kamaal Rashid Khan – better known to the world as KRK – is, one look at his Twitter biography will give you an insight into this man. No one quite knows (or cares, for that matter) how relevant all those three words in his bio are, nevertheless, on Twitter, he’s nothing short of a celebrity. For all the wrong reasons.

KRK is a classic case of a Twitter nobody turning into a celebrity in just a span of a few years. Actors, directors, producers have all dragged him through hell for his comments on someone’s body or someone’s film, but KRK is not the one to back off. Some time ago, he went on to launch his own website, where he reviews films (that ‘critic’ in his bio, remember?)… basically, sits in front of a camera and abuses the hell out of films he doesn’t like (and that list is a LONG one). He spares no one, until, of course, they take him to court.

He has a history of attacking women reviewers on Twitter for their reviews of a film he doesn’t like (and I speak from a firsthand experience), drawing some otherworldly analogy between a woman’s marital status and her reviews; and then, once he’s brought to book, deleting the obnoxious tweets. He’s done it with his own reviews and demeaning tweets. 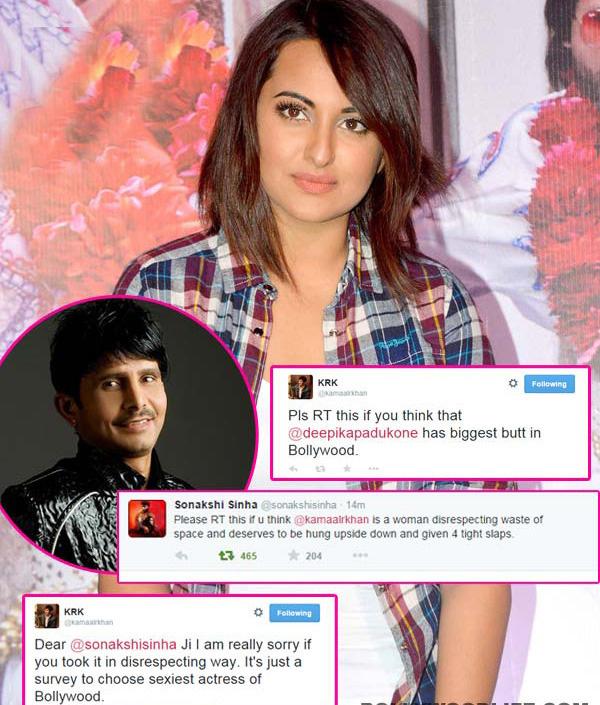 KRK tried to conduct a ‘Best Butt Survey’ on Twitter when Sonakshi decided to hit back at him. “Please RT this if u think @kamaalrkhan is a woman disrespecting waste of space and deserves to be hung upside down and given 4 tight slaps,” was Sinha’s tweet for KRK.

A man as subtle as a gun, KRK once tweeted about Bipasha Basu’s boobs. “Believe me I go crazy when Bipasha move her boobs on the song Bipasha of Jodi breakers. (sic)” Basu retorted, “There is a lot of filth in this world and I don’t think we should give these filthy, lecherous remarks any importance.”

Bhatt moved court, sending a defamation notice to KRK. Soon after the notice and a very vocal post on Facebook by Vikram Bhatt, KRK went ahead and apologised publicly on Twitter. “Recognised as a troll only or respected critic n I am 100% agree with his statement. So thanks to @TheVikramBhatt for showing me right way. Anyway thanks Mr. @TheVikramBhatt for giving me very good advise n I am sorry if I hurt you in the past. Cheers and best of luck for future.” 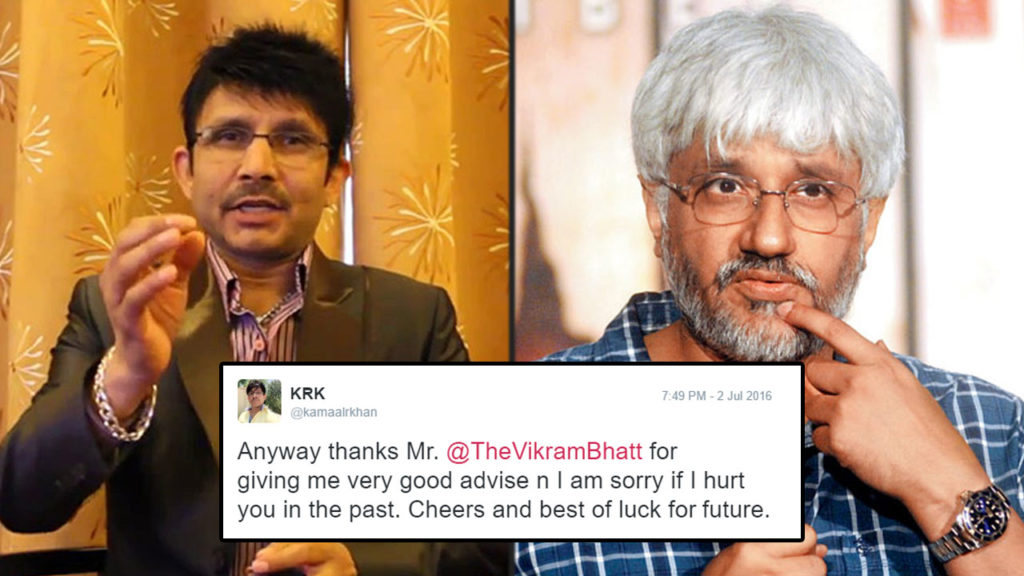 We’re not sure how many people went all ROFL on seeing KRK’s promise of turning into a ‘new very serious type of critic’… but well. Many B-Towners have made peace with this man; some by openly declaring their truce with him, and others by deciding to give him the cold shoulder. But nothing seems to dent his popularity on social media. If he decides to mend his ways… as they say, der aayad, durust aayad. 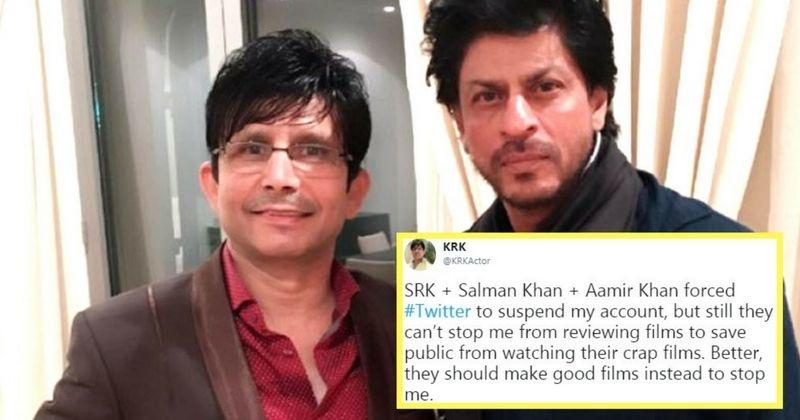 The man took on the superstar his name reminds one of too. Before Narendra Modi took the Prime Minister’s seat, KRK put out a fake tweet with a photo of Shah Rukh promising to ‘leave the country’ if Modi became the PM. Shah Rukh hit back at KRK on Twitter, “Good time to tell all fools who r talking of a tweet that I didn’t tweet, u suck as much as the grammar of that fake tweet & I’m being kind.”