Why Does Karan Johar Want To Date Instagram? Deets Inside

Director-producer Karan Johar keeps sharing photos of himself and sometimes his children on social media. Due to which he always remains in the headlines and recently he has posted an Instagram story and told about his love life. Knowing which you will be very happy. Karan wrote on his Instagram story, ‘I think I will only keep dating on Instagram! No other partner is going to allow me to like, block, unfollow and then follow. Now fans are eagerly waiting to know what is going on in Karan’s mind. 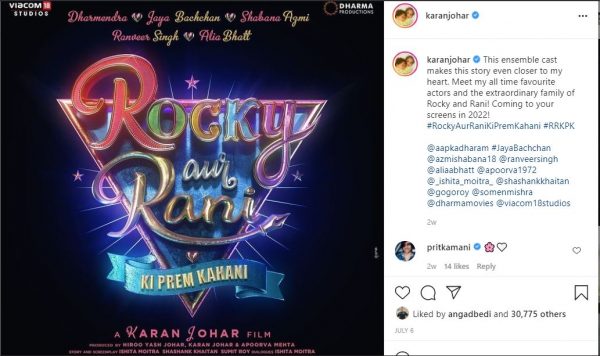 Earlier, during the launch of Twinkle Khanna’s first book in 2015, Karan had said that he had a crush on Twinkle Khanna and was in love with Twinkle. When he was only 15 years old. Karan had recently been informed through social media that he is going to make a romantic film Rocky and Rani’s love story with Ranveer Singh and Alia Bhatt and Ranveer Singh and Alia were quite excited about this. Through this post, he gave complete information about the film. Actor and comedian Rahman Khan made fun of Karan in a tweet in which he wrote that Rahul Dravid is the coach of Team India on the Sri Lanka tour.

The transition from Ravi Shastri to Rahul Dravid is very difficult for Hardik Pandya. If Rahul Dravid had been India’s coach in place of Ravi Shastri, Karan Johar would never have dared to invite Pandya to the Koffee With Karan show. Actually, in 2019, Hardik Pandya and KL Rahul were involved as guests in the show ‘Kafi with Karan’, and there Pandya had said something wrong about women. Due to which Karan and he were criticized a lot on social media. On the escalation of this matter, the BCCI had also banned Rahul and Pandya for some matches. Later, Pandya also apologized for his statement.