Yami Gautam’s recent success in “A Thursday” has given her a new identity in the Hindi film industry. Her performances in Uri, Bala and Kaabil surely brought success to her door, but “A Thursday” will remain a path-breaking project in her career. Recently, Yami shared pictures from her latest photoshoot and her fans are going gaga over her look. This summer photoshoot gave place to a neutral brown shade which can be carried off in this scorching summer too. The dress worn by the actress is a calf-length front open one piece. The belt, black and brown big buttons and the side pockets are the highlights of the dress, making it a formal piece. The actress completed the look with a pair of gold round earrings and dark brown sandals.

Yami has titled the post “Brownie points” followed by a wink and a smile emoji. Sharing the details, the actress mentioned that the outfit is by a clothing brand by the name of “ASRA” and is designed by Suhani Parekh. The beautiful pictures are shot by a Mumbai based photographer, Akshay Ambedkar.

In less than an hour, more than 42 thousand people liked the pictures and the comment section is filled with heart emojis. One of the fans complimented the actress by calling her the “Himachali Queen” while another called her a “genuine” soul. 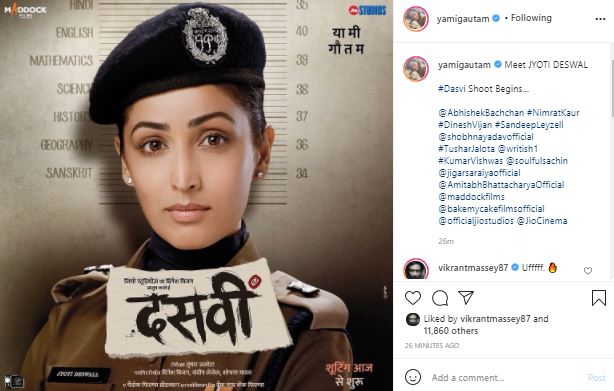 Yami’s latest project is “Dasvi” in which she is seen playing the character of Jyoti, a cop. The movie is available on JioCinema and Netflix.