Dwayne ‘The Rock’ Johnson Gifts His Personal Truck To A Fan, Shares Video As Fan Burst Into Tears!

Dwayne Johnson, the actor, gave a fan his personal custom truck. On Instagram, ‘The Rock’ posted a video in which he describes how he decided to attend a screening of Red Notice and surprise all of his fans. He explained in the video how his admirers screamed as soon as he went into the theatre and that he heard an amazing anecdote from one of the audience members. The name of that admirer was subsequently announced, and the latter was taken aback. 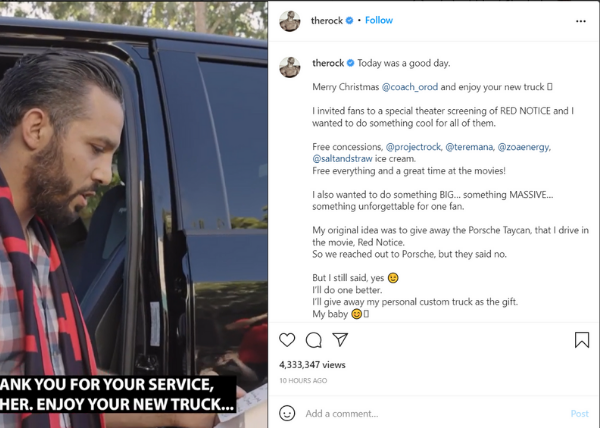 Many celebrities commented on Dwayne Johnson’s Instagram post with hearts and heart-eyed emojis to show their admiration for his thoughtful gesture. Some fans commended him for his actions, calling him a decent man with a good heart. 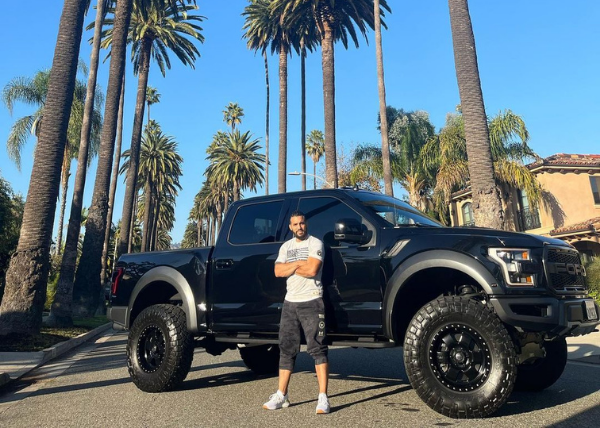 Dwayne Johnson has also been chosen to receive the People’s Champion Award for his services to the entertainment business at the 2021 People’s Choice Awards next month. Johnson decided to pursue a career in Hollywood after a successful stint in WWE wrestling (where he was known as “The People’s Champion” in the ring). Johnson has gone on to become one of Hollywood’s biggest names, with roles ranging from high-intensity action pictures to cherished Disney films, since retiring from full-time wrestling in 2004.

Johnson has a long list of acting credits to his resume, including Baywatch, Moana, and The Game Plan, to name a few. He starred alongside Kevin Hart and Jack Black in the Jumanji reboot, and he became the face of the film. In the ever-popular Fast & Furious franchise, he created a name for himself. The Rock debuted Disney’s live-action Jungle Cruise franchise earlier this year, with the promise of future sequels. He most recently appeared in Netflix’s “Red Notice,” opposite Ryan Reynolds and Gal Gadot.

The actor has previously won two People’s Choice Awards and has been nominated for more than a dozen times, but this award honours his enormous commitment to the entertainment business as well as his charity initiatives.