Varun Dhawan’s Mom Vows To Find A Girl For Aditya Roy Kapur Amid His Dating Rumors With Ananya Panday!

The Diwali celebrations have begun grandly. And Bollywood celebrities are ready with their party shoes on. We saw a lot of them becoming a part of producer Ramesh Taurani’s Diwali bash which was held yesterday. But besides all this, what caught everyone’s attention was actor Aditya Roy Kapur’s sweet conversation with Varun Dhawan’s parents, David Dhawan and Laali Dhawan. The video of the same is going viral. It so happened that while Kapur was entering the venue, he bumped into Varun’s mom and dad. Aditya greeted the veteran couple and there began a hilarious exchange of words between them. David addresses the Aashiqui 2 actor as ‘the eternal bachelor’ while hugging him. Aditya laughs at this. David then says that he hopes Aditya doesn’t remain a bachelor all his life. At this point, Laali Dhawan comes in and tells Aditya that she’s going to make sure that he doesn’t, because she’s going to find him a partner. “I’m finding a girl for you,” she is heard saying on camera. David Dhawan could be seen cracking a joke by pointing at his wife as he whispers to Aditya, “I wish I was also…” 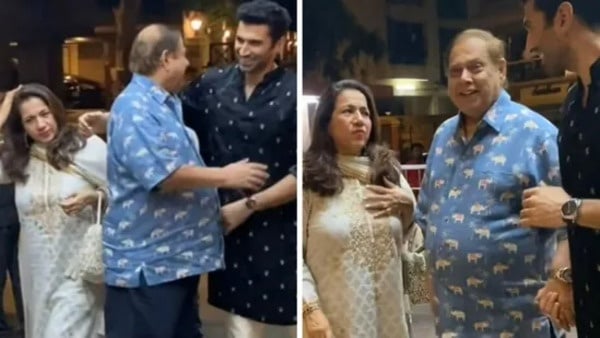 Fans love how Dhawans teased Aditya with marriage questions. They flooded the comments section with some lovely takes on the entire happening. “Kiska hai ye tumko intezar mai hu naaaaa!” wrote one of the fan girl of Aditya.

For the unversed, media mills are abuzz with the link-up rumours of Aditya Roy Kapur with Chunky Panday’s daughter Ananya Panday. During her Koffee With Karan appearance, Ananya was seen blushing when the host mentioned Aditya’s name. And most recently, the two were caught romancing on the terrace at Ramesh’s Diwali party.