Bollywood diva Alia Bhatt is trending continuously after her pregnancy announcement on Monday. As soon as the actress took to her social media handle to share the good news with her well-wishers, a storm of congratulatory messages started pouring in for her. From her family members, and colleagues to her fans, everyone extended warm wishes to the couple.

Now, after receiving so much love and blessings from all over, Alia has thanked ‘every single person’ who has wished her good. Taking to her Instagram story, Alia shared an unseen picture with her husband Ranbir and on behalf of both her and Ranbir, she wrote, “Overwhelmed with all the love! Have tried to read everyone’s messages and good wishes and all I want to say is, that it truly feels so special to celebrate such a big moment in our lives with all your love and blessings! Thank you to every single one of you.” 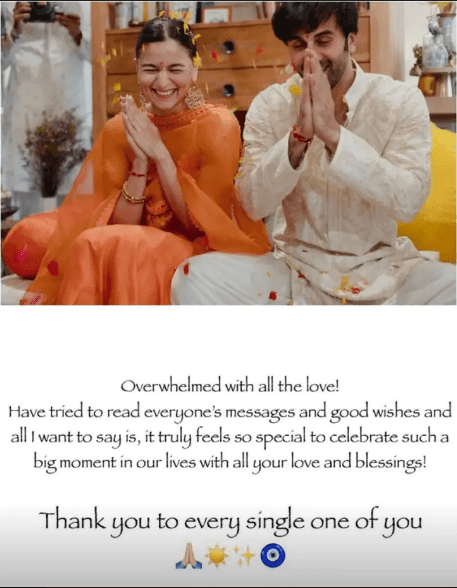 In the picture, which seems to be one from her pre-wedding functions, Ranbir and Alia are seen wearing wide smiles on their faces. While Alia is wearing a beautiful orange-colored ethnic wear, Ranbir is donning a white kurta. They are probably sitting in front of a ‘havan’ with folded hands.

Talking about Alia’s pregnancy announcement post which took the internet by storm, Bhatt shared an image of her lying on a hospital bed with the baby’s ultrasound photo (covered with a heart emoticon) on the screen. Ranbir is sitting beside her. Alongside the post, Alia wrote, “Our baby ….. coming soon.”

For the unversed, Alia and Ranbir tied the knot in a private ceremony at Ranbir’s Mumbai home Vastu on April 14 this year. They started seeing each other five years ago when they began shooting for their first-ever collaboration on-screen, Brahmastra. Helmed by Ranbir’s close friend, Ayan Mukherjee, the film is slated to release in September.

On the professional front, Alia is currently in the UK shooting for her Hollywood debut Heart of stone alongside Gal Gadot. She also has the film Darlings in the pipeline. Meanwhile, Ranbir will return to the screen in July this year with Shamshera. Next, he will appear in Brahmastra. He is currently filming Luv Ranjan’s next with Shraddha Kapoor.