On the previous day, the festival of Deepawali has been celebrated across the country. From mango to special, everyone celebrated this festival decorated with lights with pomp. At the same time, Bollywood actress Karisma Kapoor also celebrated the festival of Diwali with her entire family. Karisma has also shared pictures of her Diwali celebrations. The most special of these pictures was the picture in which Karisma is posing with her nephew Jeh Ali Khan.

Karisma Kapoor shared pictures of Diwali celebrations on the previous day. Karisma shared a picture in which she is posing with Kareena Kapoor Khan’s younger son Jeh Ali Khan. This picture of Karishma is being liked a lot by social media users. In this picture, Saif and Kareena’s younger Nawabzade Jeh Ali Khan is being compared to Rishi Kapoor. Seeing Jeh, people are commenting that he looks exactly like Rishi Kapoor, the uncle of Kareena Kapoor. Karisma has shared this picture through her official Instagram account. Sharing the picture, he wrote in the caption, ‘Wakai mein ye special Diwali hai with mere je baba.’ Social media users are very fond of this picture of Karishma and Jeh. Commenting on this picture, a user wrote, ‘This baby looks like Ri, sir.’ Another user wrote, ‘Why all this seems like Raj Kapoor.’ Apart from this, Jeh’s cuteness and bond with her aunt are also being praised.

Anil Kapoor Celebrates 30 Years Of Lamhe Says, “I Made A Lot Of Sacrifices For This Picture” 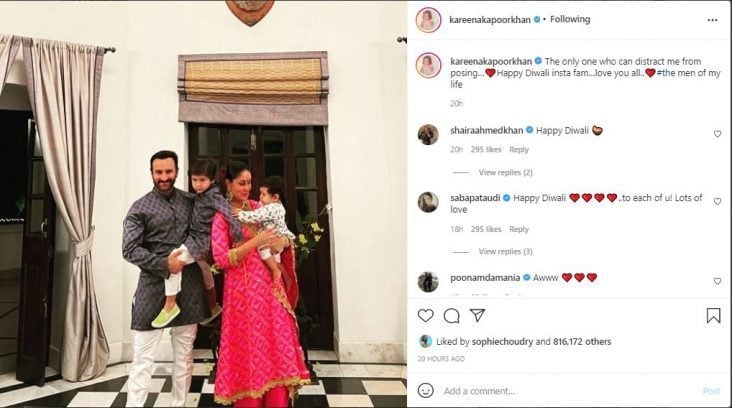 Let us tell you that earlier Kareena Kapoor Khan has also shared a picture with her entire family on the occasion of Diwali. In this picture, Saif Ali Khan is standing with their eldest son Taimur Ali Khan in his arms. So right there Kareena is standing with younger son Jeh Ali Khan in her lap. These family photos of clean and Kareena are very much liked by their fans. Talking about Karisma Kapoor’s work front, she was last seen in Alt Balaji’s web series Mentalhood.