Apart From Birth Dates, Sridevi And Vyjanthimala Share A Similar Career Trajectory Too; Here’s How!

Sridevi and Vyjanthimala are the two big names from the film industry. Whenever we hear their name, their sheer beauty and talent quickly cross our minds. The two industry divas were born on the same day. But apart from sharing the same birthdate, the two have many other things in common too. We have compiled a list of these eerie similarities between these two timeless tigresses. Have a look:

Both Sridevi and Vjanthimala are Tamilians who started their journey of acting from a young age. Sridevi did her first film when she was only 4. On the other hand, Vyjanthimala had featured in her first film when she was 13, where she played the leading lady. Later, the two had diverted to Hindi Cinema. Sridevi made her Hindi debut in Solva Sawan which was a remake of a Tamil film 16 Vayathinile. On the other hand, in 1951, Vyjanthimala had made her debut in Bollywood with a film, Bahaar which was also a remake of a Tamil hit film, Vaazhkai.

Both the heroines’ careers were stretched from Chennai to Mumbai and they were guided by their elders throughout this. If it was Grandma for Vyjanthimal, it was Mummy for Sridevi.

The two were also possessed brilliant dancing and acting skills. They got fame due to their versatility in the field. For Sridevi, it was Nagina in 1985 and for Vyjanthimala it was Naagin in 1953 which made them dancing goddesses of Bollywood. Both Nagin and Nagina were snake-based movies. 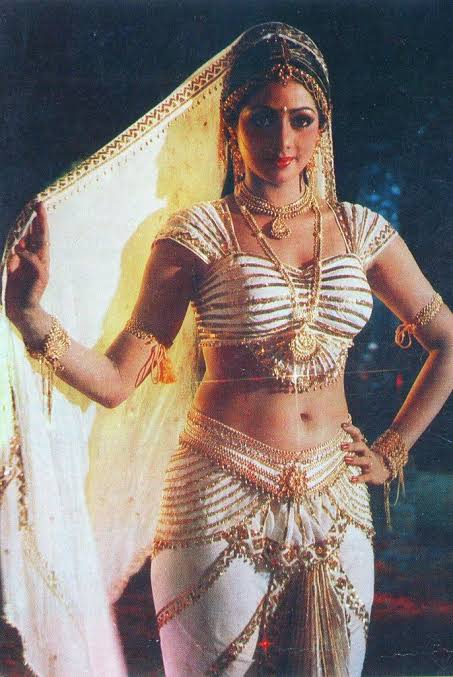 Sridevi’s most legendary dance number was Hawa Hawaai in Mr. India. Vyjanthimala’s most iconic was Hothon pe aisi baat main dabaa ke chali aayee in Jewel Thief. Both the song-and-dance numbers, separated by 20 years were choreographed elaborately and have a duration of around 8 minutes. It went on to set new standards for choreography in Hindi cinema.

Both Sridevi and Vyjanthimal had tied knots at the peak of their career. Both divas had married Punjabi men. Vyjanthimala never returned to the big screen after her marriage. However, Sridevi returned to acting with English Vinglish and Mom before her sudden death that shocked the entire nation.