EXCLUSIVE! Here’s Why Katrina Kaif Never Disclosed Anything About Her Relationship With Vicky Kaushal; Read Here To Find Out

The most gorgeous actress of Bollywood and fitness enthusiast Katrina Kaif has always been a private person. The actress has never disclosed anything about her relationship status in public, but now that the actress is getting married to the love of her life Vicky Kaushal let’s look at the statement which the actress had given about marriage and relationship. 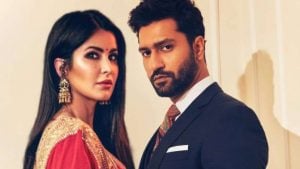 Katrina Kaif and Vicky Kaushal are all set to get married on 9th December this year in Rajasthan and yet the couple hasn’t confirmed anything till now. A lot has been written about their wedding from their sangeet ceremony to mehendi ceremony but the couple didn’t say anything. In fact, during their courtship wedding, the actress remained tight-lipped. While you jump to any conclusions regarding their silence about their marriage we have got our hands on an old interview of the actress.

Katrina Kaif in an interview with DNA said that she believes she is single till she gets married. “Wasn’t it me who said that I am single till I marry (laughs)? So we must always stand by our statements and since technically my status is ‘unmarried’, I guess I am still single.” The actress also showed her faith in destiny as she asserted that she would get married as per God’s will and that falling in love and getting married is all decided by destiny. Katrina opined, “I think you have to leave these things, your destiny and what is meant for you in the hands of God. Keep your faith and your trust in God.”

No matter how much secrecy the actress has tried to maintain about her marriage but the news about Vicky Katrina’s wedding is all over. The couple is following strict rules to keep their wedding under the wraps as much as possible.