Kartik Aryan’s Fan Gets His Name And Birth Date Tattooed On Her Chest, Checkout Actor’s Reaction On It!

Undoubtedly, Bollywood actor Kartik Aryan is one of the most loved actors in the industry. Over the years, Kartik has created a huge fan base with his cute looks and fine acting skills. Recently, the actor was in for a surprise when he saw his name and date of birth inked on a fan’s chest.

On the occasion of his birthday, Kartik was seen meeting the paparazzi and fans outside his home in Mumbai. There, he also met the fan whose way of showing her love for the actor was different.

In a video shared on social media, Kartik Aryan greeted the fan after he cut cakes gifted by the paparazzi. She presented him with a birthday cake and told him about the tattoo. “You have a tattoo?” he said. “Arre! thank you so much,” he added. 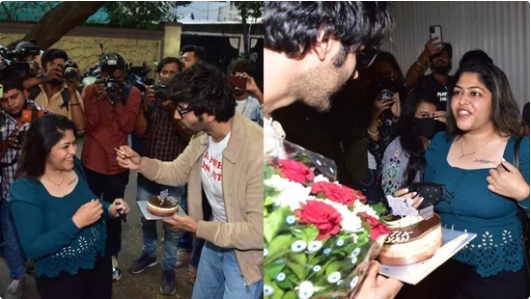 The fan then showed her tattoo to him. “Ye tattoo hai aapka (Is this your tattoo?) Is it permanent?” Kartik asked. The fan replied in affirmative and Kartik expressed his gratitude again. “That’s so sweet. Thank you so much!” He then posed for a few pictures and selfies with her.

Speaking with a paparazzo, one of his fans said, “I am a very big fan of him and I love him. It’s just like a dream come true for me.”

Several contemporaries of Kartik have wished him on his birthday. Taking to his Instagram story, Ayushmann Khurana posted a picture in which he can be seen whispering something into the birthday boy’s ear. He penned, “Ab jo main tujhe bol raha hoon, bata mat diyo kisi ko. Btw Happy Birthday!” (Don’t tell everyone what I am going to tell you. Btw Happy Birthday.) 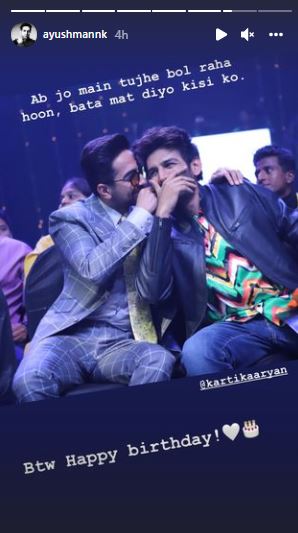 Kartik rang on his birthday after his film Dhamaka released on Netflix last Friday. This is Kartik’s first thriller film. In the film, the actor will be seen playing a news anchor reporting on a terror attack in Mumbai. The film has received positive reviews, and as per critics, Kartik’s performance in the film is full of power.

Dubbing the actor as ‘Kartik Aaryan 2.0’, one of the reviews read: “Even though Dhamaka isn’t a film high on music but it’s track Kya Khoya Paaya during the climax, pierces through your heart and stays with you for long, as it beautifully sums up the entire film. If you like thrillers, Dhamaka won’t disappoint you and Kartik Aryan definitely impresses with his never-seen-before avatar and convincing performance.”

On the work front, Kartik has a few projects in the pipeline. His kitty is full with films like Bhool Bhulaiyaa 2, Freddy, Shehzaada, and Captain India.