Shehnaaz Gill Hugs & Kisses A Fan After She Sat On Her Knee And Cried, Stirred Her Bodyguard Again

Shehnaaz Gill continues to win people’s hearts and her fan base is growing every day. The biggest reason for building an enthusiastic fan base is that the actress’s love for the fans has been acknowledged. Recently, the Bigg Boss 13 star met a female fan who was crying badly after meeting her. Shehnaaz hugs her tightly and comforts her. 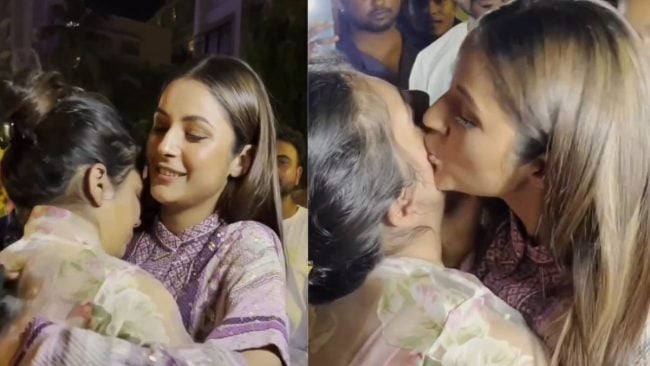 Later, the girl falls to her knees, slightly embarrassing Shehnaaz. The fan wanted to give her a kada and even asked her to wear a bracelet. Shehnaaz urged her to stand up and contain her emotions as they were getting captured on camera. However, Fan didn’t care about the paparazzi and continued to convince Shehnaaz to wear that bracelet. A woman (probably a guard) intervened and pushed the fan away, but Shehnaaz interrupted her and told her to back off. Shehnaaz finally accepts the gift and hugs her back. 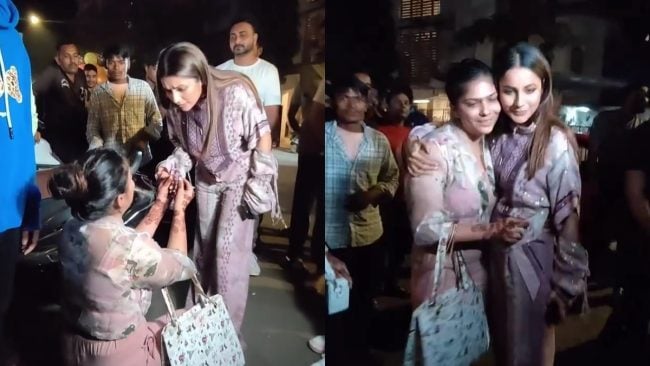 When the video was released, netizens praised Shehnaaz so much. Most netizens love the fact that Shehnaaz knows how to acknowledge and admire her fans. Gill never wants to disappoint her fans, and she’s already proven that with several hot moments.

The Bigg Boss 13 member recently attended a press conference in Dubai. After the event, several excited fans greeted the actor and congratulated them by capturing memories on their smartphones. Soon after, the guards got angry at the fans who had gathered around Shehnaaz and tried to push them away from the actress. Shehnaaz avoids him at first and keeps walking, but loses her cool and orders him not to come in between her and the fans.

Other bodyguards tried to intervene, but Gill continued to ignore them and greeted every fan with warm hugs and selfies. A video showing the situation at the time was released and became a hot topic. Shehnaaz smiled as he greeted all the fans for more than two minutes. Shehnaaz is making her Bollywood debut with Salman Khan’s Kisi Ka Bhai Kisi Ki Jaan.