Inter-faith marriages rarely make an appearance on social media. They are generally done in a hidden manner. These are common all over India, but only under covers. Whenever such a happening makes it to social media sites, it is always at the receiving end. Such marriages and alliances face criticism most of the time and if it is between a Hindu and a Muslim, it is tagged as a case of ‘Love Jihad.’

Love Jihad, as a concept came into being in 2014. It was popularized under Hindutva ideology and refers to the process where a Muslim boy marries a Hindu girl.

Recently, a similar incident happened in Nashik. The invitation card for a wedding function of a Hindu woman and Muslim man was leaked and circulated online. After getting tremendous pressure from various social media comments, the family was forced to call off the function eventually. 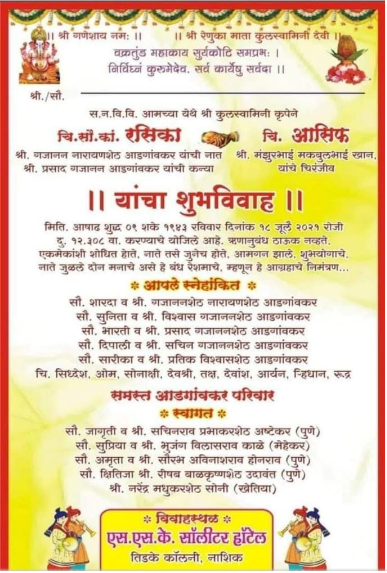 The function was scheduled for July 18 at a hotel in Maharashtra’s Nashik between a 28-year old Rasika, and her former classmate Asif Khan. They have already registered their marriage at a local court.

All the guests were invited and all forms of preparations were in full swing. But unfortunately, the invitation card got leaked and went viral on social media. The users got angry and enraged with the union and also described it as a case of Love Jihad.

The father of the girl is a prominent jeweler in his area. He wanted his daughter to get married with Hindu rituals and, so, organized a ceremony at a local hotel. Only his close relatives were invited to the ceremony and the groom’s family had no objection to it.

But after facing backlash from social media users, the bride’s father Prasad Adgaonkar had to cancel the event. To do the same, he wrote a letter to his community on July 10 informing them that the function had been called off.

Some of the users explained how such a thing will give other girls the courage to do the same. After getting all kinds of negativity online, Adgaonkar received calls also asking him to cancel the wedding.

Pondering on the same, Adgaonkar decided to call it off. A meeting was organized by the community to discuss the issue with the father of the bride. After the ceremony was canceled, the news of the family getting agreed to do the same started circulating online.

According to the information given by the bride’s father to his community, his daughter is differently abled. The families of both Rasika and Asif Khan had known each other for a few years and they were both in agreement with the union.

In a statement, Sunil Mahalkar, president of Lad Suvarnakar Sanstha Nashik, said, “Adgaonkar has informed the community that the wedding has been called off. We are not aware of the court marriage, but we have been given a letter confirming the cancellation of the function. It was their personal issue but, as per the situation, this decision has been taken.” 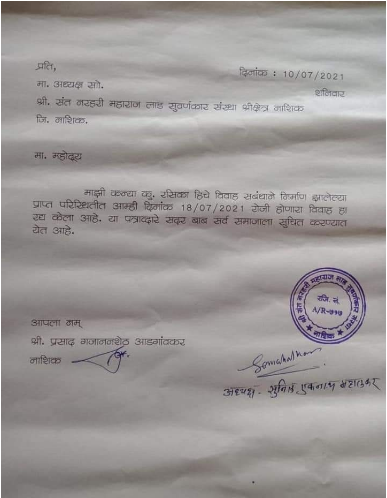 Since the incident has happened, Adgaonkar remained unavailable for comment. No Police complaint has been done by either of the two parties.

Not only in the common world, but also in the glamour industry, we witness such incidents. Recently, the divorce of actor Aamir Khan and wife Kiran Rao was given a religious angle. Kareena Kapoor and Saif Ali Khan also come under the scanner of bigots many times.