After India’s Independence, Now Kangana Ranaut Made A Controversial Statement About Mahatma Gandhi, Know Inside What She Said!! 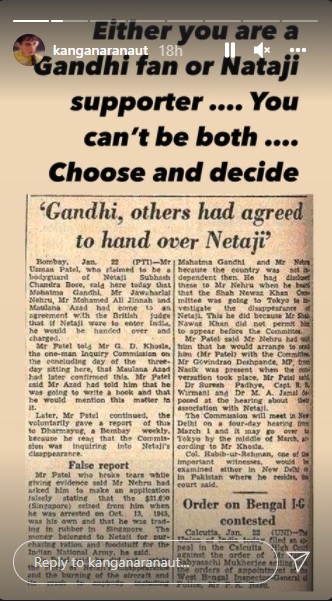 She also keeps her opinion openly on social and political issues. Kangana Ranaut has written three posts one after the other on her official Instagram account. In a post, she has shared the news of an old English newspaper. With this news, Kangana Ranaut wrote in the caption, ‘You can either be a fan of Gandhi or a supporter of Netaji. You can’t be both. Choose and decide’. After this, Kangana Ranaut has written two long posts, in which she has given a controversial statement about Mahatma Gandhi. The actress wrote in her first post, ‘Those who fought for freedom were handed over to their masters by those who neither had the courage nor the boil in blood to fight those who oppressed them. These were power-hungry and cunning people. It was he who taught us that if someone slaps you on one cheek, turn the other cheek in front of him and you will get freedom. In this way, not only freedom but only begging. Choose your hero wisely’. 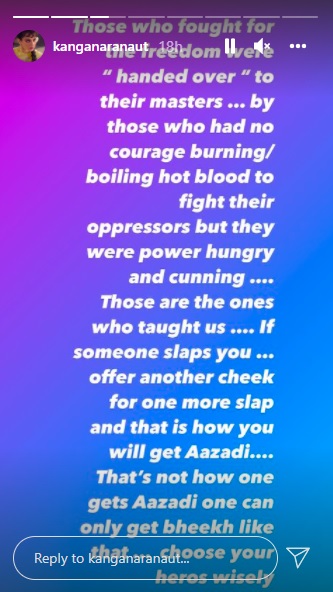 In her second post, Kangana Ranaut, questioning the decisions of Mahatma Gandhi, further wrote that Gandhi got Bhagat Singh hanged. The actress wrote, ‘Gandhi never supported Bhagat Singh and Netaji. There is a lot of evidence that indicates that Gandhiji wanted Bhagat Singh to be hanged. So you have to choose for whom you stand for because it is not enough to keep them all together in your memories and remember them every year on their birth anniversary.” Kangana Ranaut wrote in the end of her post, ‘To be honest, this is not just stupid but very irresponsible and superficial. People should know their history and their heroes’. Earlier, Kangana Ranaut had said in a media program that the freedom got in 1947 was begging, the country got the real freedom in the year 2014. There is an atmosphere of anger across the country after his statement.