The hijab cover story has completely changed for the country. What was about 2 weeks back a burning issue that whether a hijab may be allowed in the educational institutions or not, has now become a contentious matter for the Indian secular system to decide how radically they would want to treat the Indian society. To single out and kill in the street in the name of doctrine to practice for a certain religious faith as an act is unacceptable constitutionally, morally, humanly and in any manner of thinking. Activists and political leaders on both sides of the table need to understand that students and youth cannot be played around with for their political goals. Such has become the menace of religious – political goof up that it is the young and the innocent who lose lives, livelihood and their path. This is exactly what has happened in Karnataka in the district of Shivamogga.

And to what gain?

Since time immemorial religion has been used to polarize political votes. Here again in the elections of UP and the other four states, polarization by religious incidents is being done blatantly. Since the BJP is not likely to win the same number of seats as it did last time the political jumla of polarizing votes in favour of Hindus has started. About two weeks back with the hijab incident- It seems that the Hindu activists clad in saffron deliberately instigated Muskan, a Muslim student dressed in hijab, trolled and asked her to leave campus or change attire if she wanted to attend classes. She kept her faith and carried on, with the college authorities trying to defuse the tension by speaking to both the sides. 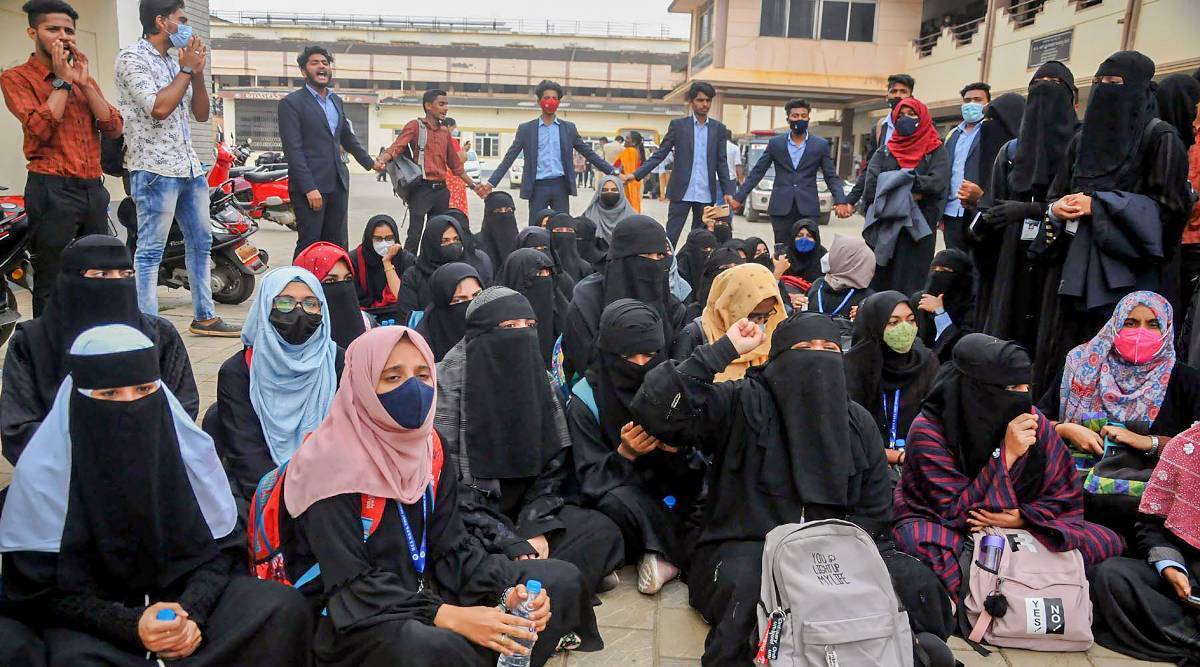 Yet on the other side speeches of leaders on both sides – Muslims and Hindus provoked the students to be up in arms against each other, thereby polarizing virtually the mandate which was voting in the UP state elections. Whatever will be the outcome of these elections is far from being in sight, but yes it does create some havoc in minds of voters to inspire the voters to vote for either their Hindu leader or the Muslim.

Coming to the incident of a seeming revenge by supposedly Muslim activists against the VHP activist seems to have culminated as an unfortunate incident, the repercussions of which may be far and wide in the present regime of BJP. Quite recently in the last week as the verdict of the 2008 Ahmedabad blasts was announced wherein 38 people were found guilty, 28 of them adjudged with the death penalty, come from a certain religious faith, which too has led to polarization of votes and the thought. There is an undercurrent of opinion which may not be written in absolute words, either in media or otherwise in speeches. But we all or aware of the reality.

UP is predominantly now divided in Hindu and Muslim vote banks, and the BJP has further polarized the entire state, for good or for bad, in sectors which may vote for either the Hindus or the Muslim leadership irrespective of the work done in the district. To run or administer such a large state by keeping it divided on the basis of religion, with collection of taxes to redistribution of incomes both will suffer in such a polarized population and situation. Is it the beginning of another Pulwama, which happened at the general elections for the BJP.

Usually party in power would create a religious situation which will keep them in power or het them back in to it. If the chips of BJP are really down and there is a movement to create some sort of a religious disturbance in midst of electioneering, it could be deciphered that BJP is trying to save its position the state. Definitely this killing has done bad for both the sides as tensions in the area will simply perpetuate for a very long time to come. The hijab and the unfortunate loss of life of the VHP activist has the potential of creating opinions in the voting mandate, forcing the voters to choose the leadership on the basis of religion only. This is bad for the country, bad for democracy and definitely bad for growth.

In such a scenario SP, which has a Hindu front and a Muslim backing to a very large extent, will be at loss of words as to which vote bank to appease and that could be the decisive battle in the UP elections for the BJP.

…comes from a long-term campaigning by various women bodies all over the world, in recognition of the rights and recognition of women in a more evolved society, which we live now. The movement has come of age and people do recognize that 8th of March each year be celebrated as one. This issue of March, the magazine carries a special section on women who are being recognized for their exemplary work. It may be emphasized that Woman’s Era was the first magazine to have coined the word homemaker, in recognition of housewife who toils and takes on herself to build a home for the entire family. It was also again Woman’s Era, which coined the word superwoman in recognition of the woman who works at the office, goes back and builds her family and her home. Both these words, have now come to stay in all major differences where there is any portrayal in society.