Javed Akhtar Gets Trolled For Making A Mistake On The Statue Of Netaji Subhas Chandra Bose: Deets Inside!!

A hologram statue of Netaji Subhas Chandra Bose was unveiled at India Gate by Prime Minister Narendra Modi on Sunday. The statue will be installed near India Gate. This statue is being made by famous sculptor Advaita Gadnayak.

There is a discussion all over the country regarding this. Now lyricist Javed Akhtar has given his opinion on this matter. Javed Akhtar believes that the idea of installing a statue of Netaji is good but the choice of its position is not right. Javed is getting trolled after this tweet.

Javed Akhtar tweeted and wrote, “The idea of Netaji’s statue is good but the choice about the statue is not right. The traffic is going to continue around this statue throughout the day and the pose of the statue will be saluting. This is not good for his reputation. It would have been better if he was sitting in this statue or waving his hand in the air as if shouting a slogan.” 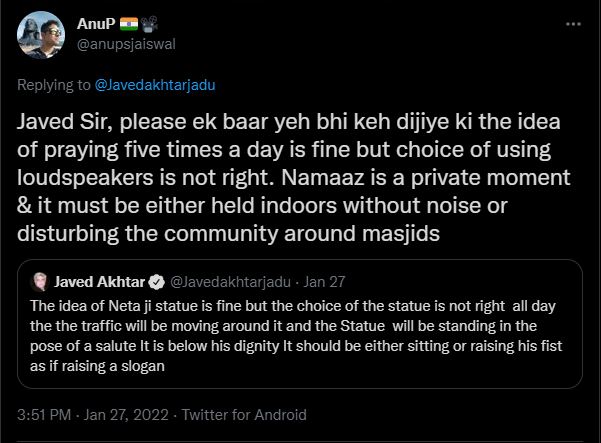 After this tweet of Javed Akhtar, different reactions are coming on social media. One user has written- “You just have to criticize Modi ji… whatever be the reason”. One wrote – “Javed Sahab, once you also say that the idea of offering Namaz five times a day is fine, but the idea of reading in a loudspeaker is very bad. Keep your knowledge to yourself”. 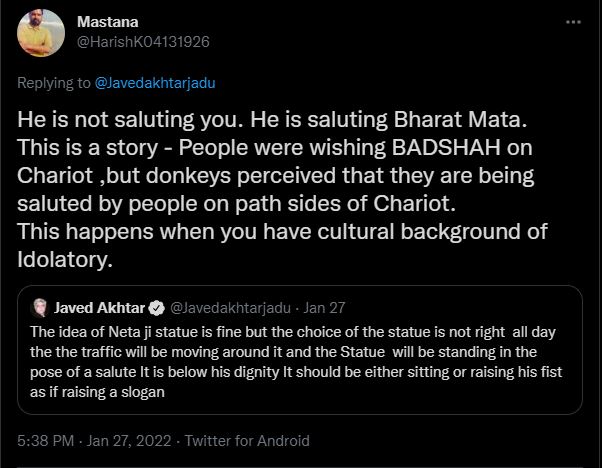 One user wrote– “He is not saluting you. He is saluting Mother India. This is a story- People were wishing BADSHAH on Chariot, but donkeys perceived that they are being saluted by people on path sides of Chariot. This happens when you have cultural background of Idolatory.” 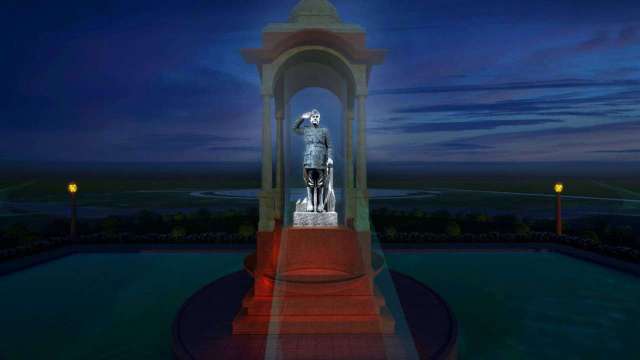