Mom-to-be Alia Bhatt responded to the piece of information that claimed that she would delay her upcoming film “Heart of Stone” due to her pregnancy. Putting an end to such rumours, Alia wrote a note on her social media profile, in which she assured everyone that her work would not be delayed due to her pregnancy.

According to the information, it is also being said that her husband and actor Ranbir Kapoor, may travel to the UK to bring his wife home. Alia soon reacted strongly to this information and criticized it for being antiquated. Subsequently, many of her fans, friends, and celebrities came out in support of the actress, including Pakistani artists Zara Noor Abbas and Durefishan Saleem. 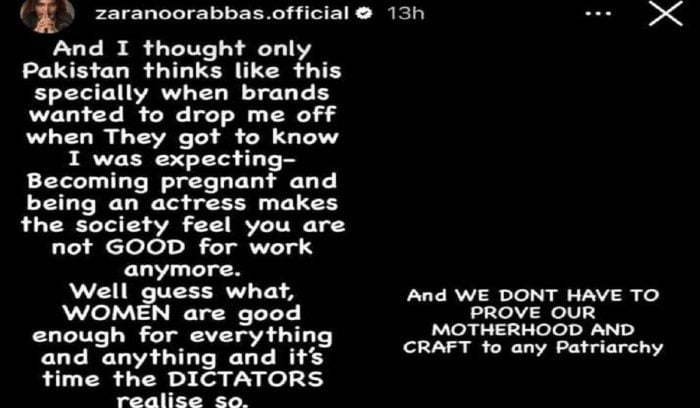 The reaction of Zara Noor Abbas

Sharing Alia Bhatt’s story feed, where she revealed that she was shooting and that her work won’t be sidelined due to her pregnancy, to which Zara and Durefishan said that women need to prove their motherhood is not needed. Zara posted about it on her social media, saying: “I thought only Pakistan thought so, especially when brands wanted to leave me when they found out I was expecting. Society thinks that after being pregnant and being an actress, you are not good for work now.”

Zara further added, “Well, guess what, women are good enough for everything and anything, and now it’s time for dictators to realize that. We don’t need to prove our motherhood and craft to any patriarchy.”

Durefishan reacted to Alia’s comment and said in her post: “People should stop telling women what to do. We can get married or have kids, and still be kick*** fab. Marriage is a part of life, not a halt. Stop telling women that their career goals don’t match her.” 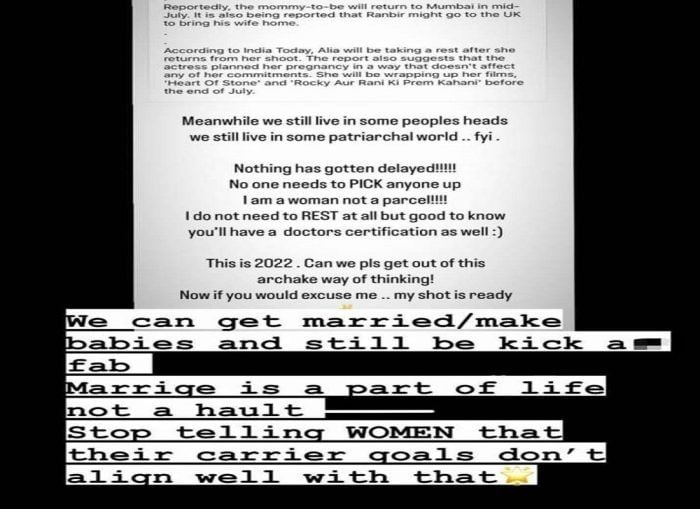 It was Alia Bhatt’s reaction

Actress Alia Bhatt, who announced the news of her pregnancy on June 27, has reacted strongly to the news, stating that her Hollywood debut with Gal Gadot in the Netflix feature film “Heart of Stone” may have been delayed due to her pregnancy. With that, it has also been said that Ranbir will go to pick up Alia from the UK, where she is shooting. To which she responded that she is shooting even while pregnant, and though the news is surprising for the family, her work will not be sidelined.

Alia Bhatt said, Meanwhile, we live in some people’s heads and we also live in some patriarchal worlds. Nothing is too late; no one needs to pick anyone up. I am a woman, not a parcel. I don’t need to rest at all, but it’s nice to know you’ll have a doctor’s certification. But, can we please get out of this archaic thinking? Now, if you’ll excuse me, my shot is ready.