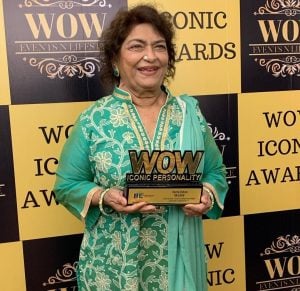 A biography of Saroj Khan was announced on Saturday, which marks the first death anniversary of the late choreographer. The film will bring to life the story of the struggle and success of Khan, widely acknowledged as India’s first female choreographer. Details about the film are yet to be officially announced.T-Series, headed by producer Bhushan Kumar announced the news on Instagram. “We are glad to announce that we’ve acquired the rights to the legendary choreographer, Saroj Khan’s life story. Stay tuned!” 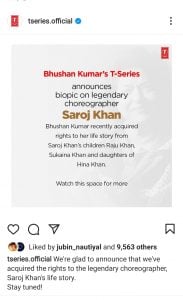 T-Series announce the statement for the biopic of Saroj Khan

Labelling Saroj Khan as India’s first female choreographer, Bhushan said he will produce the film and has bought the rights from her children Raju Khan, Sukaina Khan and daughters of Hina Khan, Saroj’s daughter who died. Raju is also a choreographer. 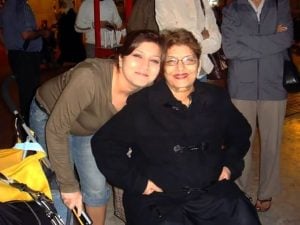 “My mother was loved and respected by the entire industry, but we have closely seen her struggle and fight to become who she was. We hope with this biopic, Bhushanji will be able to tell her story, her love for us, her passion for dancing, and her fondness for her actors and respect for the profession with this biopic,” the late choreographer’s daughter Sukaina said in a press statement.

Raju added,”My mother loved dancing and we all saw how she dedicated her life towards that. I am glad I followed in her footsteps. My mother was loved and respected by the industry and it is an honour of us, her family, that the world can see her story. I am glad Bhushanji has decided to make a biopic on the graceful Saroj Khan.”

Saroj Khan, joined the industry when she was a 3-year old child to become a dancer at 10 and soon became an assistant choreographer at the age of 12. Choreographing for around 3500 songs in her career span, Saroj Khan gave us several hit dance songs like ‘Ek Do Teen’, ‘Choli Ke Piche Kya Hai’, ‘Hawa Hawai’, ‘Dhak Dhak Karne Laga’ and many others. 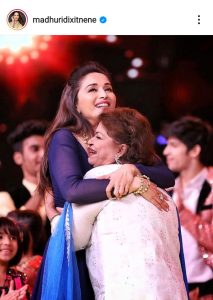 The 3-time National Award Winning choreographer, who was known for her collaboration with Madhuri Dixit and SriDevi, also worked with several millennial actors.