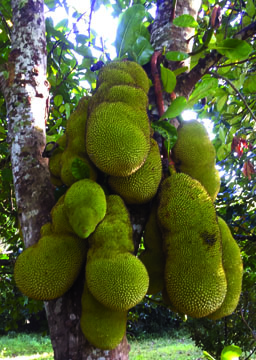 On Wednesday 21 March 2018, the jackfruit was declared as Kerala’s state fruit. The elephant is the state animal of Kerala, great hornbill, the bird and kanikkonna the flower, green chromide or ‘pearl spot’, popularly known as karimeen, as its state fish.

Most of the states in India have their state trees, flowers, fruits and the like. Some states have their songs too. Jackfruit is also the state fruit of the adjoining state of Tamil Nadu. The jackfruit has played a significant role in Indian agriculture for centuries. Archaeological findings in India have revealed that jackfruit was cultivated in India 3000 to 6000 years ago.

The aim is to promote the Kerala jackfruit as a brand in markets across the country and abroad, showcasing its organic and nutritious qualities. This would also help in giving a boost to the fruit’s production and sale, besides increasing its value-added products. According to available information, around 320 million jackfruits are produced in the state every year, of which 30 per cent go waste. There are more than 100,000 trees in backyards and grown for shade in betelnut, coffee, pepper and cardamom plantations. Young leaves are relished by goats.

There are also plans to distribute jackfruit saplings among the public to grow it in their backyards as part of plans to expand the cultivation.

Kerala’s jackfruit is organic and tasty as it is produced in a very natural way without using any chemical fertilisers or pesticides. The government also conducts a ‘Jackfruit festival’ every year to popularise the fruit and its products among public.

Besides the taste and nutritious qualities, the timber value of the jackfruit tree is also high.

Jackfruit wood is widely used in the manufacture of furniture, doors and windows, and in roof construction. It is termite proof, resembles mahogany, and is superior to teak.The veena (an Indian plucked string musical instrument) made at Thanjavur in Tamil Nadu, from the seasoned wood of a jackfruit tree, is called Thanjavurveena. It has an excellent tonal quality which improves with the passage of time. It has received a Geographical Identification mark.

The agricultural office in Ambalavayil in Wayanad (Kerala) will function as a research station for jackfruit.

The jackfruit is a species of tree in the Artocarpus genus of the mulberry family (Moraceae). It is native to parts of South and Southeast Asia, and is believed to have originated in the south-western rain forests of India, in present-day Kerala, coastal Karnataka and Maharashtra.

The jackfruit tree is well suited to tropical lowlands, and its fruit is the largest tree-borne fruit, reaching as much as 36 kg in weight, 90 cm in length, and 50 cm in diameter. The heaviest jackfruit weighed 42.72 kg and was found in Pune, Maharashtra, as verified on 23 June 2016. The giant jackfruit measured 57.15 cm long and had a circumference of 132.08 cm.

The jackfruit tree is a widely cultivated and popular food item in tropical regions of India, Bangladesh, Sri Lanka, Nepal, etc. In India it grows mainly in Kerala, Tamil Nadu, Karnataka and Maharashtra as well as Bengal and Assam.

Jackfruit is also found across Africa as well as throughout Brazil and in Caribbean nations such as Jamaica. It is also the national fruit of Bangladesh. 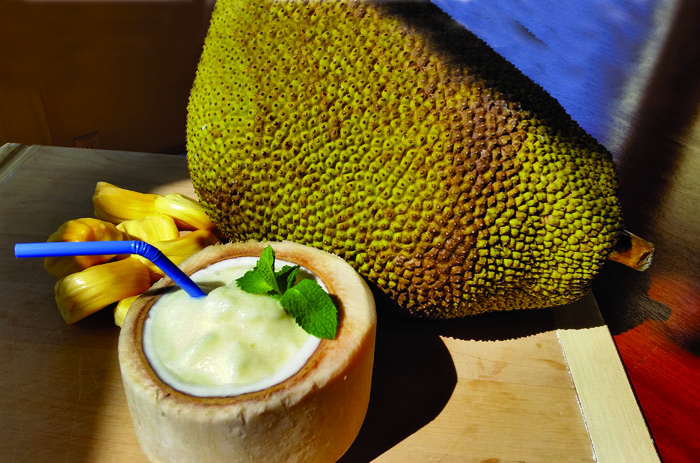 The word “jackfruit” comes from the Portuguese ‘jaca’, which, in turn, is derived from the Malayalam language spoken in Kerala’s term “chakka”. When the Portuguese arrived in India at Kozhikode (Calicut) on the Malabar Coast (Kerala) in 1498, the Malayalam name chakka was recorded by Hendrik van Rheede (1678-1703) in the HortusMalabaricus, vol. iii in Latin. The common English name “jackfruit” was used by the physician and naturalist Garcia de Orta in his book published in 1563.

It is called kathal in Bengali, ‘katahal’ in Hindi, ‘pala-pazham’ in Tamil, ‘panasa’ in Telugu, ‘phanas’ in Marathi and Gujarati, and ‘halasu’ in Karnataka.

The jackfruits contain a large number of seeds enclosed in a yellow to orange juicy sheath, and it is this sheath that forms the edible portion of a jackfruit. There may be up to 100 or more seeds in a single jackfruit depending on its size.

The jackfruits give out a characteristic odour offensive to many. When fully ripe, the uncut jackfruit emits a strong disagreeable odor, resembling that of decayed onions. If they are stored in a refrigerator uncovered, the odour pervades every item of food stored. Even if kept in a closed room, the odour of a ripe jack fruit will announce its presence to all visitors, right at the door. 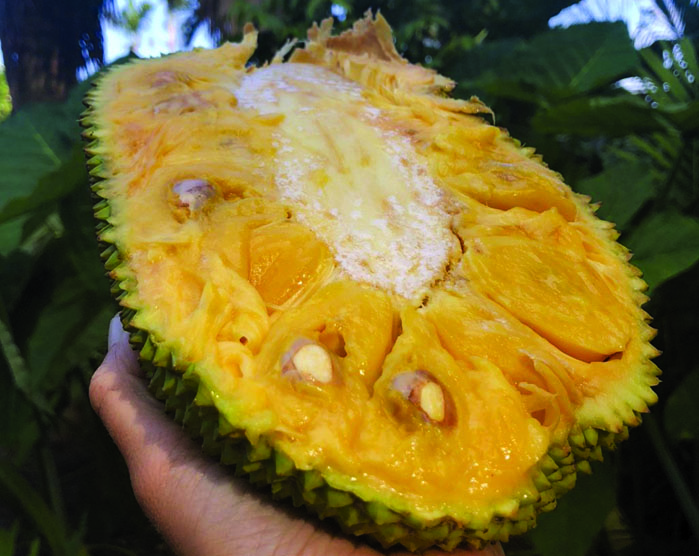 The edible sheath contains 70 per cent water and the rest consists of carbohydrates, proteins and minerals. It is a rich source of vitamins A and C. There are two common varieties. The first has a sweet fleshy crisp or even brittle sheath while the second has a thin, slimy and even slightly sour tasting sheath. The sheaths of the first variety are cut into chips, dried, deep fried and sold as jackfruit chips like potato or tapioca or banana chips.

Cut in small pieces and devoured after dipping in honey or even otherwise, the sheaths of the second variety are a delicacy. They are converted into small pancakes and dried in hot sun like mango papad.

The seeds covered with a cashew nut-like skin – but not so tough – are cooked, dehulled and consumed as peanuts or added to other vegetable curries. They are rich in starch and are a good source of vitamins B1 and B2. They form a popular ingredient of many culinary preparations in South India. Even the flour made out of dehulled seeds is consumed. Poor farmers store them for rainy days and eat them during bad times. After taking out the edible sweet portions and the seeds, the rest is discarded and used as cattle feed.

The unripe fruits are used as a vegetable and are considered as meat for vegetarians, but cutting an unripe or even a ripe jackfruit is an exercise in itself. When cutting it open, a sappy, sticky substance (latex not rubber) comes from the fruit. The younger jackfruit will have more of it. It is cut with a heavy sharp knife smeared with edible oil and one has to rub oil on one’s hands to prevent the latex coming out of the fruit touching the skin.

Generally jackfruit fans buy edible portions from a vendor instead of suffering the ordeal of cutting a jackfruit.

7 Myths Around Avocado That You Believe But Are Not True
Taste Bok-Choy A powerful superfood marching majestically ahead of spinach.
Traders Of Connaught Place Continue Feeding The Workers & Distributing Sanitizers
Locked In The House? Here Are 8 Things You Should Stock In Your Fridge