After Samantha-Chaitanya’s Divorce, Ram Gopal Verma Says ‘Divorces Are Made In Heaven’

Filmmaker Ram Gopal Varma or RGV is quite famous for his spicy opinions on different scenarios in the film industry. And the same has happened now. This time it is Naga Chaitanya and Samantha’s divorce.

On Saturday evening, one of the most loved couples of the South film industry, Samantha Ruth Prabhu and Naga Chaitanya announced the sad news of their separation putting an end to all the rumors through a joint statement. This has left their fans completely heartbroken. But wait. RGV’s opinions on the same are different. The director has welcomed the decision of the sensational south couple.

BB: Shilpa Shetty Will Miss Shamita ‘Tunki’, But She Will See Her More

Appreciating the split between Samantha and Chaitanya RGV has expressed that divorce is more of a reason to celebrate than marriage. In a series of tweets, RGV wrote, “DIVORCE should be more celebrated than MARRIAGE because in marriage, you don’t know what you are getting into, whereas in divorce you are getting out of what you have gotten into,” he wrote. “MARRIAGES are made in HELL and DIVORCES are made in HEAVEN,” he added in another tweet.

Further in another tweet, RGV continued, “Most marriages don’t last more than even the no. of days they celebrate the event, and so real sangeet should happen at a DIVORCE event where all divorced men and women can sing and dance.” 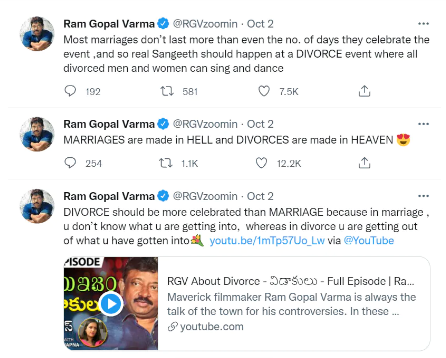 Well, this is not the first time that RGV has given these kinds of views on divorces. Earlier, Verma defended actor Aamir Khan and filmmaker Kiran Rao against trolls after they announced their split. “I wish you both #AamirKhan and #KiranRao a very RANGEELA life much more COLOURFUL than before… I believe that a divorce should be celebrated more than a marriage because divorces happen out of knowledge and wisdom…and marriages happen out of ignorance and stupidity,” he wrote.

For the unversed, there had been a lot of speculations going on around Samantha and Chaitanya’s separation since July. But before their fourth marriage anniversary, the two have shared that they are no longer together. The note shared by Sam read, “To all our well-wishers. After much deliberation and thought Chay (Naga) and I have decided to part ways as husband and wife to pursue our own paths. We are fortunate to have a friendship of over a decade that was the very core of our relationship which we believe will always hold a special bond between us. We request our fans, well-wishers, and the media to support us during this difficult time and give us the privacy we need to move on Thanking you for your support.”

Chaitanya’s father and a big name in the entertainment industry, Nagarjuna also reacted on the matter. He took to Twitter to write, “With a heavy heart, let me say this – whatever happened between Sam and Chay is very unfortunate.” He also added that their family will ‘always cherish the moments spent with’ Samantha. He also wished the two the strength to get over the break-up.