From loving each other when they weren’t well-known to supporting each other like a pillar when the tides of life became rough, Ayushmann and Tahira are exemplars of how to maintain a happy marriage. Ayushmann Khurana and Tahira Kashyap have completed 11 years of togetherness and still going strong. Today, as they celebrate their anniversary both Tahira and Ayushmann penned sweet posts for each other on social media.

The star wife took to Instagram to share a throwback picture from their sangeet ceremony along with a heartfelt note. She wrote, “11 years back we had each other’s asses and still do! Happy anniversary @ayushmannk (This one’s from our sangeet and marriage. And I remember my heart was pounding, beating, bouncing 10 times faster and still does though the reasons might have changed! Kidding you still get to me just like before.”  On the other hand, Ayushmann shared a picture of a young Tahira and wrote, “Eleven years with this beautiful girl. Got butterflies of all kinds while posting this picture. Umm Happy anniversary @tahirakashyap.” Check it out:

11 years back we had each other’s asses and still do! Happy anniversary💞 @ayushmannk (This one’s from our sangeet and marriage. And I remember my heart was pounding, beating, bouncing 10 times faster and still does though the reasons might have changed! Kidding you still get to me just like before😁😛)

Eleven years with this beautiful girl. Got butterflies of all kinds while posting this picture. Umm ❤️Happy anniversary @tahirakashyap. ❤️ 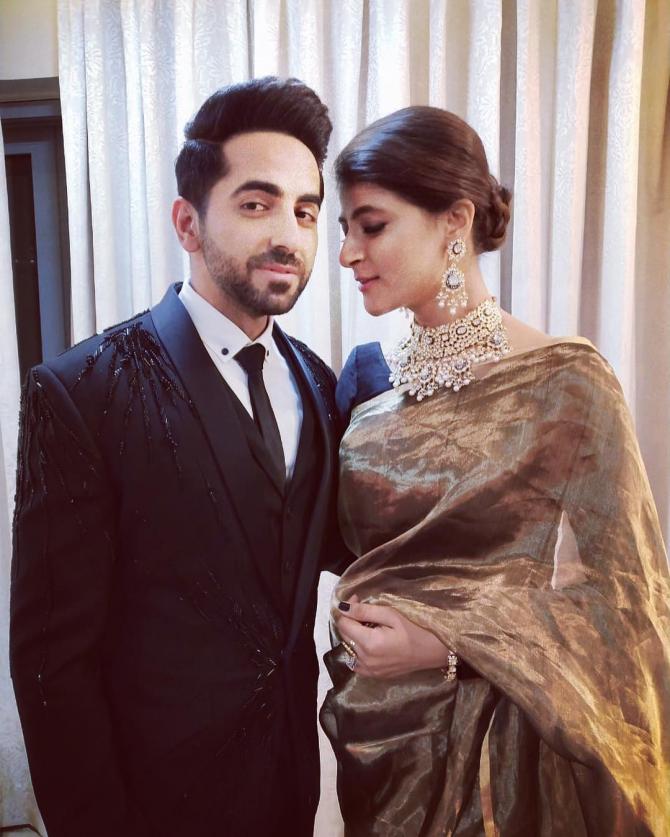 One of the husbands among them was Ayushmann Khurrana. Since his wife Tahira is still on a recovery stage as she underwent cancer treatment a while back, she is unable to fast for her hubby, but Ayushmann being a doting husband kept the fast for Tahira’s long life giving out goals to all the husbands out there. Tahira, who was in Dubai shared a video where she is face-timing Aysuhmann who breaks his fast after looking at the moon. In case you missed it, take a look:

Embarrassing you further @ayushmannk Our #karvachauth moment! While I am in Dubai for an event, my certainly better half keeps a fast for me on his set! (p.s I am still popping some pills so couldn’t fast) But how adorable are you Mr A ! Love you so much❤️ #fastinghusbands thank you @shrutiv11 for capturing this moment!

Ayushmann and Tahira have also seen many ups and downs in their relationship but they stood strong together against all the evils. In a throwback interview with SpotBoye Tahira had once opened up about the rough patch in their marriage. She was quoted as saying, “I had a problem with him kissing on screen. I felt like a big, huge fat whale sitting at home. When you are pregnant your hormones also go up and down. Here this boy is looking at his youngest youth best and he is romancing women and what is this onscreen kiss! We both were very young. He didn’t have the time and patience to take me along and I didn’t have the patience to understand. There was this disconnect that we were not there for each other to take each other along in that journey. Somewhere he knew that she doesn’t mean mad. I also knew he wasn’t cheating. I had to evolve as a person to understand what art is.”

She had further added, “I had given up many times but he did not. He didn’t use to give up but he also didn’t make up… We both have really evolved as artists, as companions and we have seen a journey including cancer being a part of it. Where we are right now, it is at its strongest best.”

We wish Ayushmann and Tahira a lifetime of togetherness.