Actress Kashmera Shah is known for speaking her heart out on public platforms. She is someone who never holds back her thoughts and openly expresses her opinions on social media. Because of her bold and outspoken nature, she runs into controversies too.

Shah is quite attached to the controversial reality show, Bigg Boss. She is also vocal about how the contestants are doing on the show. The current season is of Bigg Boss is winning audiences’ hearts and not just them, even Kahmera is quite impressed with a current lot of contestants. On Saturday, the actress took to Twitter to praise the participants of this season. But that’s not all. Kashmera, being her sarcastic self mocked Rubina Dilaik and Abhinav Shukla who was part of the show last season.

Though the former Bigg Boss contestant did not take any names, it is pretty evident from her tweet that it is aimed at RubiNav. 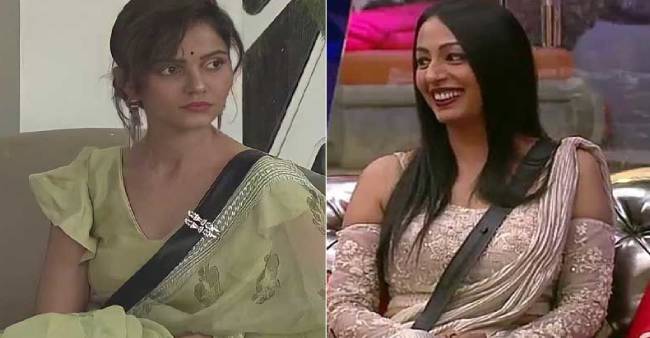 She wrote, “Just saw last night’s episode, and this season of @BiggBoss kicks last season’s a**. Superb job team for casting interesting people that are interested in playing the game and don’t spend their entire time in doing yoga and eating apples @ColorsTV @BeingSalmanKhan #bb15.” 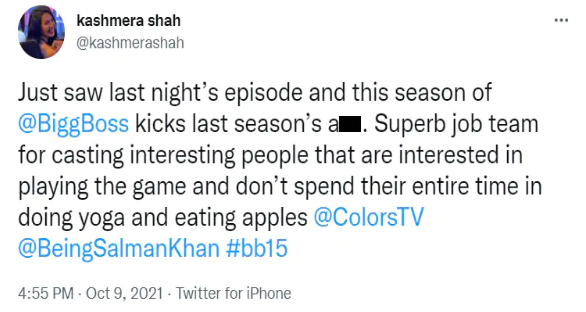 Fans were quick to notice Kashmera mentioning ‘Yoga’ in her tweet which was meant for Rubina and the reference of ‘apples’ which targeted Abhinav. Rubina herself has made a note of the same. She has replied to Kashmera in a dignified way. Rubina wrote, “Sending you love and strength.” 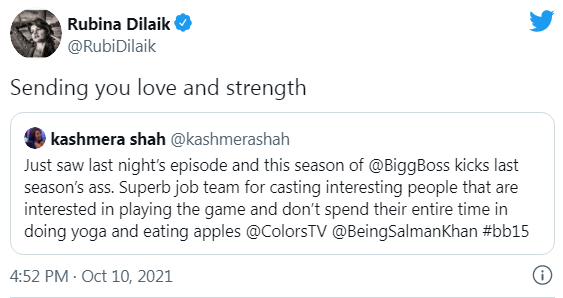 Abhinav, on the other hand, took a jibe at Kashmera’s ‘insipid’ journey on Bigg Boss. Take a look at his tweet:

Kashmera’s tweet sparked strong reactions from the RubiNav’s fans. Criticizing Kashmera, one fan wrote, “#RubinaDilaik and #AbhinavShukla were dignified contestants who passed the entire season without using abusive language or indulging in violent behavior. The whole BB14 lot was quite decent. And currently, everyone is doing superb in their careers. So keep quiet,” one wrote.

“People do yoga and still win. That is because they have something called ‘PERSONALITY’ & ‘RIGHT ATTITUDE’. That attracts the audience. People like you keep spreading negativity online to seek attention. Improve on yourself. Much needed,” another user wrote.

A fan of Rubina and Abhinav also reminded Kashmera of her slow gameplay in the last season as a challenger. The netizen wrote, “You had also gone na last season..why didn’t you make it interesting…you were chucked out in the first week itself…matlab public found those ‘uninteresting’ people better than you…matlab kitni hadd boring thi yaar tum (that means you were boring beyond measure)!!!”

This season, Kashmera has shown support for Karan Kundra, Jay Bhanushali and Vishal Kotian. She has responded to a tweet by former Bigg Boss contestant Manu Punjabi, praising Pratik Sehajpal’s game in Bigg Boss 15 by tweeting “I don’t agree. He is very irritating to watch. I enjoyed watching Karan (Kundrra) and Jay (Bhanushali) and Vishal (Kotian). But this Pratik makes no sense. At least have fun dude. I want entertainment, not irritation.”

The 15th season of Bigg Boss is trending since its premiere. All the participants of this season are shining bright in their ways.