Bella Hadid walked the runway for Coperni’s Spring 2023 show at Paris Fashion Week in an outfit that was spray-painted on her in real-time. The internet was shocked by the famous moment.

Coperni, a Paris-based French womenswear label, produced one of the most unforgettable fashion moments yesterday night as they presented their Spring 2023 collection at Paris Fashion Week. Bella Hadid finished the show for the company in a frock that had been spray-painted on her body. Yes, you read that correctly. They accomplished this accomplishment by employing Fabricant, a can-based substance that solidifies into a piece of wearable cloth. This legendary fashion scene recalled Alexander McQueen’s Spring 1999 presentation, which featured a flailing Shalom Harlow spinning on a wooden turntable while two spray-painting robots smeared her white multi-layered off-the-shoulder dress in black and neon-yellow paint. Continue reading to learn more about Bella’s look. 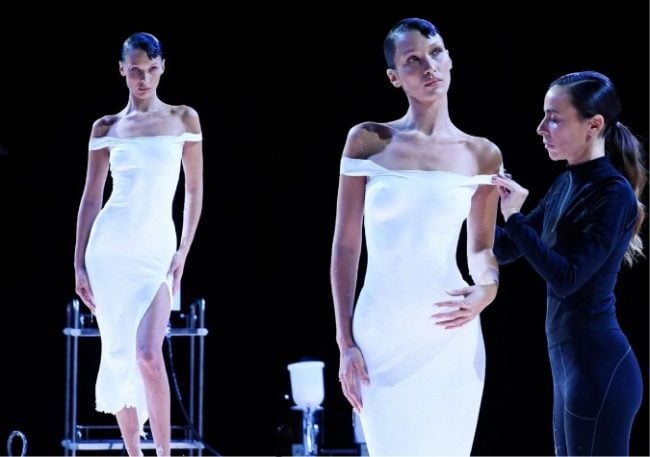 Coperni debuted its Spring 2023 collection at Paris Fashion Week on Friday. Bella Hadid finished the show in a tight, white, off-the-shoulder gown manufactured in real-time from quick spray-on fabric. Designers Sébastien Meyer and Arnaud Vaillant reportedly dedicated their exhibition to “women of this world.” “To you, women who transcend your body and never lower your sight before they said in the concert notes that morality was like barbed wire”. 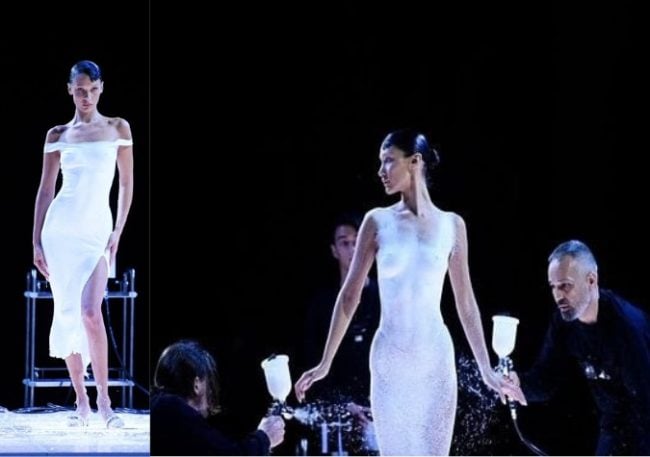 Bella Hadid closed the event by walking down the runway wearing only white panties and covering her chest with one arm. Then two workers from Fabrican began spraying her body. Bella emerged from the process wearing a tight asymmetrical white gown.

Check out the video of Bella Hadid’s Dress Below:

Then, a Coperni designer moulded the straps of her body-hugging dress in an off-the-shoulder manner, cut the hem, and created a thigh-high slit on the front, leaving the audience speechless. She finished the ensemble with peep-toe sandals and a sleek bun.

According to rumours, Bella Hadid’s dress was completed in less than 10 minutes. The non-woven fabric appears to be washable and reusable. Coperni, named after Nicolaus Copernicus, described the theatrical display as a “futuristic fusion of science and fashion.”