Severe solar storm may hit the earth soon: GPS and phone signal will not work.

A hot and strong storm wave emanating from the sun could hit Earth between Tuesday and Wednesday. Due to this, GPS systems, mobile networks and satellite TV can be affected. Their services may be interrupted. Due to solar storms, the quantity and frequency of Northern and Southern Lights at the North and South Pole of the Earth can increase. 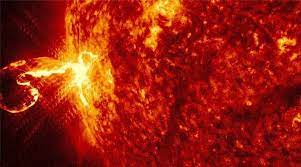 According to the report, on July 3, a major explosion was seen in the southern part of the sun. Because of this, solar flares i.e. solar rays are rapidly moving towards the earth. They can cause trouble on the earth for a few minutes at any time between Tuesday and Wednesday i.e. on July 13.

According to spaceweather.com, this storm approaching the sun can affect the Earth’s magnetic field, people who live near the North or South Pole may see beautiful auroras in the night sky, but this Beauty also brings with it many problems. 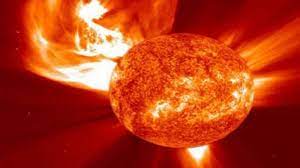 According to the US space agency NASA, this solar storm is coming towards the Earth at a speed of 1.6 million kilometers per hour, which will intensify more in some time. As soon as this storm will enter the Earth’s magnetic field, due to this satellite signals will be disrupted, which can cause problems in GPS, TV, mobile networks.

Due to the solar storm, the outer atmosphere of the Earth can be heated, which will have a direct effect on the satellites sent by different countries. Due to this, the services of aircraft, ships, mobile phones and satellite TV etc. run with the help of GPS can be disrupted. It may also happen that in some countries the power supply may be interrupted and people have to face darkness. 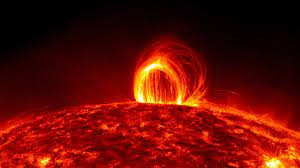 Due to the solar storm, there will be a threat of another storm on Earth, which is called a geomagnetic storm. A geomagnetic storm occurs when charged particles from the Sun collide with the Earth’s magnetic field. Due to this, the Earth’s magnetic field gets interrupted for some time, due to which it is difficult to understand latitude and longitude. This causes the GPS to stop working.

When this solar storm started from the sun on July 3, high-frequency radio communication was interrupted in parts of the US, but it was only for a few seconds because the wave from the sun caused changes in X-rays And because of them the radio signals were interrupted.

The worst form of a solar storm on Earth was seen in March 1989, when Canada’s Hydro-Quebec electricity transmission system blacked out for 9 hours due to a solar storm. After this, in 1991, a solar storm caused power outages in almost half of America, but these were not the biggest storms.